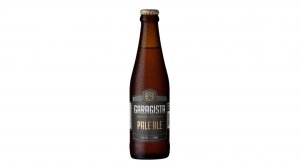 “We are the only cider makers in South Africa to use an ultra-violet light pasteuriser,” he states, noting that, with this process, energy consumption is a fraction of that of heat pasteurisation.

Furthermore, Miller says Garagista, which was established in June last year, actively encourages the recycling of its beer and cider bottles in the local villages and surrounding areas.

“Although the process is labour intensive, we reuse the same 330 ml bottles up to eight times in some instances. “[In addition], our waste malt is not dumped but goes to a local worm farm to produce both ‘worm tea’, a natural garden fertiliser, and top-quality com-post,” he explains.

He adds that the company is “one of only a handful of breweries” that make a South African pale ale. “Although it is based on an old English recipe from the town of Burton-on-Trent, it uses only local ingredients.”

He adds that to celebrate the local Riebeek Valley Olive Festival and the surrounding wheat lands, the company makes an olive-infused Weiss beer every year, “which we also believe to be the only one of its kind in the world”.

The Riebeek Valley Olive Festival is an olive and wine tasting, art and live enter-tainment event held every year at the town of Riebeek Kasteel, in Cape Town. Visitors get to enjoy the region’s food, fruits and culture, and are also invited to visit local estates to sample the olives on offer as well as wines made in the area.

Miller says the company’s focus on using local and regional ingredients helps to give Garagista a competitive edge in what is fast becoming a cluttered brewing environment. Further, even though Garagista is a small brewery, it takes technology, development and environmental protection seriously.

“While our initial brewing equipment was procured in Germany, all subsequent expansions to our brewery have been with equipment sourced locally, from sources as diverse as dairy tank suppliers in Sasolburg, in the Free State, to essential-oil distillation equipment makers in Riebeek Kasteel.”

He adds that most of the brewing equipment has been made to Garagista’s unique specifications and the production thereof has helped to upskill local producers to manufacture equipment and machinery they had never made before.