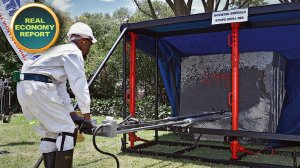 The Mandela Mining Precinct has unveiled the two new rock drill prototypes that are set to enhance drilling operations and reduce the exposure of operators to dangerous conditions. Natasha Odendaal has more.

2020 marks the start of the final stage of a three-phased approach to build and use two newly developed rock drills in conventional mining.

The two prototypes, designed and built by Novatek and HPE to industry needs under the Isidingo Drill Challenge, are lighter, more energy efficient, quieter and easier to assemble and dismantle than the drills that are currently used by industry.

The concepts required the reduction of the weight of the drill from between 28 kg and 32 kg to about 16 kg; the ability to be set up and taken down within 15 minutes; the use of alternate power source to compressed air; and the incorporation of parallelism.

The nationwide initiative resulted in the selection of three concept designs submitted by Fermel, HPE and Novatek by a panel of subject-matter experts in the field.

Now, phase 3 will be undertaken during the course of 2020, entailing the manufacture and underground performance testing, with the testing protocols to be developed.

The aim of the third phase is to take the prototypes and move them closer to commercialisation.