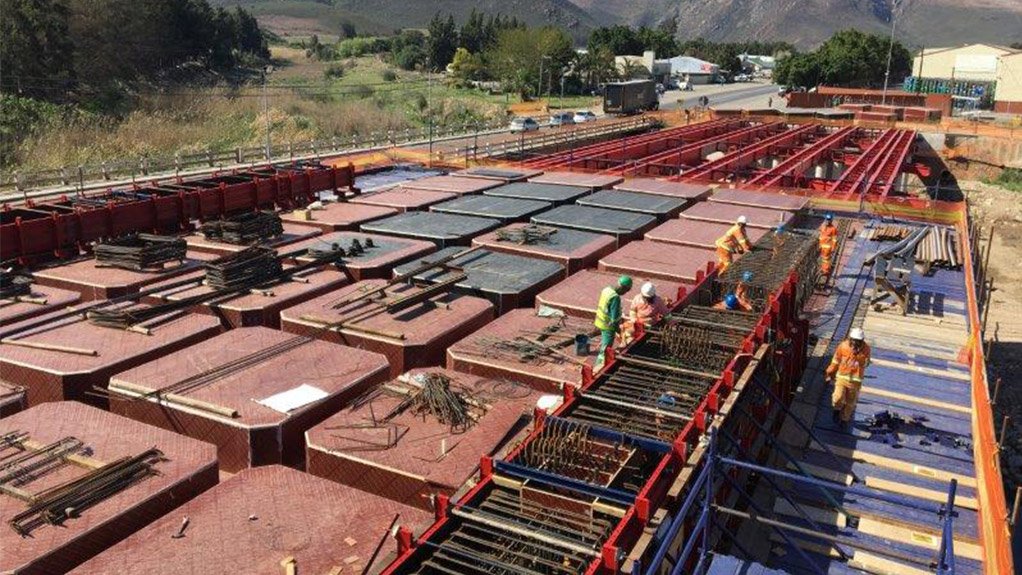 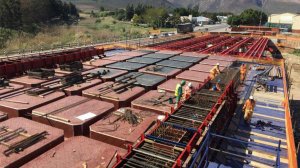 This is a first in South Africa, using a transverse launching method of the completed arch bridge after it is constructed adjacent to the final road position, in order to minimise the impact on traffic during construction on this strategic route, Michael Bouwmeester, AECOM Highway and Bridges Lead: Africa, comments.

Scheduled for completion in early 2019, the project has been undertaken by the Western Cape Provincial Government's Department of Transport and Public Works, Roads Infrastructure branch. A focus point of this project, the historic Cogmanskloof Pass, connects the towns of Ashton and Montagu in the Western Cape.

About 7 000 vehicles travel through Ashton and 3 600 through Cogmanskloof Pass and Montagu every day. The 6.5-km-long pass stretches through a majestic landscape of towering rock formations and a colourful pastoral patchwork. Renamed after the popular Cape Colonial Secretary John Montagu, the town's original name of Cogmanskloof is where the pass took its name from. The name Cogmanskloof is derived from the Cogmans Khoi chiefdom, which lived in the area in the early 18th century.

The project aims to reconstruct parts of Trunk Road 31 Section 2 and 3 (TR31/2 and 3), from Ashton to Montagu (also the start of the well-known Tourist Route 62), including the section through Cogmanskloof, to a higher geometric standard. This is to improve traffic and pedestrian safety, as well as to enhance the bridge's flood capacity, and resistance to overtopping of the road by the adjacent Cogmanskloof River.
Heritage and environmental aspects were a major consideration in the design and construction, which includes special stone masonry and landscaping elements. The sections of this route through the municipal areas of Ashton and Montagu are also to be reconstructed, so as to provide for future capacity improvements and service life requirements.

TR31/2, a single carriageway with gravel shoulders, was constructed in 1877 and surfaced in 1931, with the last resurfacing undertaken in 1985. Therefore, the road was in need of upgrading and rehabilitation due to marked deterioration of the road surface. In addition, the geometric alignment had to be adjusted in a few places so as to enhance safety. The Ashton-Montagu region and Cogmanskloof Pass in particular, experienced substantial flood damage on a number of occasions, most notably due to flooding in 2003.

A major challenge was replacing the existing river bridge in Ashton, which had to be upgraded due to anticipated increasing traffic volumes, and the structure's tendency to be overtopped during large flood events. This relates to the very skew river crossing, and the fact that the existing multi-span arch shaped bridge deck and pier configuration was hydraulically inefficient, and needed to be improved to accommodate design flood events on this strategic route.

Several options were considered to boost the hydraulic capacity of the bridge. However, a key consideration was to allow unrestricted flow in the main watercourse opening, and also to enhance the available free-board of the bridge crossing. Therefore, the most viable solution was a single-span configuration.
This would span the full 110 m width of the river, eliminating the possibility of debris build-up. A tied arch bridge type is particularly well-suited for span lengths within this range, and was selected after comparison of several alternative options. The final design adopted was a single-span concrete tied arch bridge, with a deck suspended by stay cables, and accommodating four traffic lanes and two walkways.