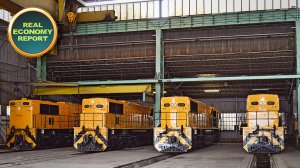 TMH Africa acquired the facility for R12-million from DCD Rolling Stock, which operated for decades before closing down as a result of financial difficulties. The facility currently employs 130 people, but has the potential to employ 500 people once activity increases. Premier David Makhura tells us more about the plant background and public potential.

The acquisition of the facility formed part of a R500-million investment drive into Africa, starting with South Africa and Egypt. TMH Africa CEO Jerome Boyet explains how the investment will be distributed at the Boksburg facility.

When considering its target countries, the company sought places with the political will to develop rail as public transport, as well as demand for new and refurbished locomotives. Boyet elaborates on their market and opportunities.