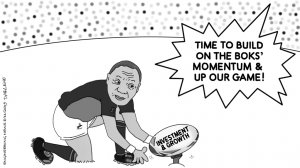 During 2019, South Africans arguably came to terms with the damage caused by State capture to the country’s economic playing field, as well as its key players. It became clear that repairing the pitch and revitalising our damaged economic muscle would take longer, and be more painful, than initially anticipated when President Cyril Ramaphosa took over as leader of the African National Congress. There are signs, though, that the debris is being cleared and that confidence is starting to return to Team South Africa. Drawing inspiration from South Africa’s recent ascension to the pinnacle of the rugby world, it’s surely time for our economic players to take to the field with a winning investment-led game plan.