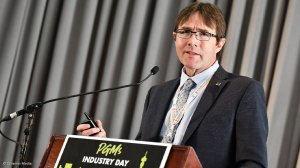 In what has been the longest economic downturn for the country since 1945, it has become necessary for government to consider alternative strategies and change various policies to allow business to grow the economy, Minerals Council South Africa CEO Roger Baxter said during a media briefing on Friday.

Ahead of the National Budget speech to be delivered by Finance Minister Tito Mboweni next week, the council gave its insight into what it feels the South African economy – and mining industry – needs.

Baxter noted that the 2020 budget would set the tone for whether the fiscal crisis of South Africa will be resolved any time soon or not.

Among the measures the Minerals Council believes need to be included in the budget speech is urgent implementation of the National Treasury’s proposed economic growth strategy to improve the country’s competitiveness and resolving key constraints to infrastructure delivery.

Baxter said the private sector’s participation in key network industries must be considered, beyond seeing it as a source of taxes or tariffs, if the country is to unlock any real growth.

The Minerals Council stated that it hoped to see allocation of some resources towards the promotion of energy efficiency and demand management in the country. This could include incentives for the installation of energy efficient equipment and possible support for investment in renewable energy generation.

Further, Baxter said government would have to curb its spending through curtailing its wage bill and eradicating wasteful expenditure and fraud – including to stop bailing out State-owned enterprises.

“Government has to cut its coat according to its cloth, instead of considering more tax rate hikes.”

In 2019, South Africa’s headline corporate tax rate was 28% and its effective tax rate in 2017 according to the Organisation for Economic Cooperation and Development (OECD) was 27.1%.

The council further suggested that more had to be done to tackle crime, not only at mines, but also in industries that affect the mining sector.

For example, cable theft on Transet’s rail lines has caused many consignment delays in recent weeks.

Baxter said a Mining Police Task Force could be established to handle the crisis.

THE CASE FOR MINING

Mining remains a crucial sector to the economy, contributing 8% to GDP and closer to 16% when considering the multiplier effects. The sector is also responsible for more than 20% of the country’s exports and, if semi-fabricated mineral products are included, this rises to almost 40% of exports.

The industry also accounts for 17% of private fixed investment and employs around 1.3-million people in the country.

Baxter believes the decline in mining output over the years has been partly owing to Eskom starting to “pull the plug” in 2007 and a lack of greenfield exploration.

Baxter explained that it was in 2007 that Eskom starting holding the country to lower percentages of electricity supply availability, which prematurely downscaled the mining sector.

In the case of greenfield exploration, it had been lacking and struggling owing to, besides others, wary investors, in light of policy uncertainty; logistics bottlenecks; costly and unreliable electricity supply; and growing criminal activity – in the form of illegal mining, community unrest and armed attacks on mines.

“The long-term flourishing of mining in South Africa depends on the problems being solved around licences not being granted and funding mechanisms not leading to results,” Baxter added.

He said modifications to certain sections of the Income Tax Act and the introduction of a “flow through share scheme” could encourage venture capital investment in greenfield exploration.

The council had completed a baseline study of the role of junior miners and the constraints they are facing, which would be presented to the National Treasury – to better incentivise the sector – in due course.

Baxter added that while there were many regulatory issues that needed to be fixed to ensure quick licensing for high-level reconnaissance permits and prospecting rights, it was also crucial for government to help create “pre-competitive” information for exploration companies and also create better incentives to create local venture capital funding.

He explained that “pre-competitive” information was the provision of high-resolution geophysical data online on an open and free basis, along with a mining cadastral system that enables all prospective explorers to ascertain potential deposits and then apply online to explore these deposits.