The engineering and nonengineering challenges behind the salvaging of Costa Concordia 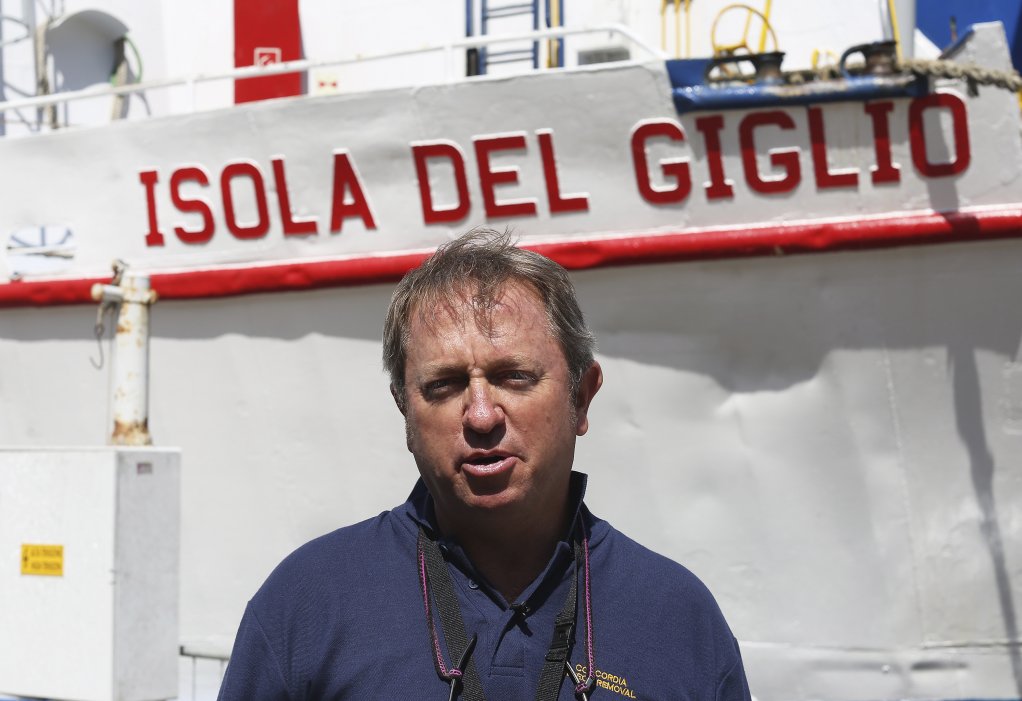 The story of the salvage of the Italian cruise liner Costa Concordia, from May 2012 to July 2014 (the refloated ship was towed into Genoa harbour on July 27 and is now being scrapped), is well known in general outline, as is the fact that the salvage master for the operation was a South African, Captain Nick Sloan. The ship ran onto rocks just off Giglio Island, off the coast of Tuscany, in North West Italy, on January 13, 2012. It rolled over onto its starboard (right) side, with 32 people losing their lives (the body of the thirty-second and last victim was only recovered from the wreck in August this year).

Very basically, the salvage operation involved building underwater platforms, which had to be anchored in the bedrock, on which the ship would rest when it was righted. The hull was reinforced with plates on the outside of the port (left) side of the hull. The bow was reinforced.

Twelve large anchor blocks were very precisely emplaced, also underwater, on the inshore side of the wreck. Multistrand cables were run from the reinforcement plates (which were fitted with doughnut rings to which the cables were attached), under the hull to the anchor blocks, the secure the ship during the 2012/13 northern winter, when little work was possible and the concern was to prevent the wreck from breaking up. Subsequently, specially manufactured sponsons were welded to the port side of the ship and flooded with water. Powerful winches, installed on towers built above the anchor blocks, pulled the cables and the ship was parbuckled – rolled upright. Thereafter, the starboard side of the ship was also reinforced and more sponsons were welded to the starboard side. In due course, powerful pumps emptied the sponsons of water, the ship was refloated and then towed away.

A ‘Crime Scene’ But there are many fascinating details that are not well known, and which were revealed by Capt Sloan at a recent breakfast organised by the Association of Distributors and Manufacturers of Electronic Components. For instance, the wreck was, under Italian law, a crime scene, which meant that none of the companies bidding for the open tender to salvage the ship (which had, the Italian government desired, to be removed in one piece) were allowed on board it during the six-week tendering phase. As a result, the bids had to be based on publicly available information and on assumptions based on photographs of the wreck and its location. Nor did the bidders have access to the blueprints of the ship (these were only released after the salvage contract had been awarded).

Sloan was hired by a consortium led by Titan Salvage, of the US ,and Micoperi, of Italy. “We had to submit over 200 engineering documents [for the bid],” he noted. That was equivalent to two years work under normal conditions for an offshore design company.

The documents were, in fact, drawn up in just 12 weeks. The consortium contracted a specialist German company to develop detailed digital models of the ship (initially without the help of the blueprints), which were used to simulate the salvage operation. These simulations identified weaknesses in the ship’s damaged structure and led to modifications of the salvage plan. When the ship was finally righted, the models of the damage it had suffered were revealed to have been incredibly accurate. In total, 1 000 pages of software programming were written to support the salvage.

The construction and provision of the sponsons, platforms, anchor blocks, cables, chains and all the gear required for the operation involved five shipyards, seven fabrication facilities and more than 150 subcontractors across Italy. In order to be able to work on the slopping port hull side of the ship, all the welders who were to attach the reinforcing plates first had to go on week-long mountaineering courses. Fifty-five coded welders were employed. The gaps between the sponsons (once welded to the hull) were only 38 mm. Once all the water was pumped out, they provided 66 000 t of buoyancy. Blister tanks attached to the bow provided additional buoyancy. In total, 33 000 t of steel was fabricated and 9.3 t of welding rod consumed.

To secure the platforms, 26 large-diameter holes had to be drilled 12 m into the bedrock underlying the seabed. Each drill head was 2 m in diameter and a closed drilling system was used to protect the environment. Because the ship was impaled on two rocks, there was a gap between most of the hull and the rest of the reef. This gap had to be filled using bags of grout cement. These bags were of different shapes in order to fit the profile of the sea bed. Each design had to be separately certified. The bags each had a capacity of between 30 m3 and 40 m3 and they were manufactured in India. However, they all had to be fitted with recovery straps, which were made in the UK. The straps was fitted to the bags in Italy. In all, 22 978 t of grout was used.

The consortium had four teams working on the salvage operation in parallel. These were the inshore team (responsible for positioning the anchor blocks), the near shore team(diving and the positioning of the grout bags, among other things), the Concordia team (preparing, initially, the port side of the ship for the fitting of the sponsons) and the offshore team (large-diameter drilling and platform support and installation). “We had eleven different dive teams in the water at the same time,” reported Sloan. Full emergency medical support for the divers was provided. On average, 130 divers were on site and 22 000 individual dives were made. “It was a very diver-intensive operation.” Extensive use was also made of underwater remotely operated vehicles which shot 55 000 hours of video.

To pull the ship upright, the salvors had 13 000 t of pulling force (not counting the assistance from the flooding of the port side sponsons). They had estimated that it would take between 3 500 t and 4 000 t to do the job. In fact, the Costa Concordia only started moving at 7 000 t. It took longer than expected – about 19 hours – but the process went better than expected. As for the refloating, that took ten days.

Before the salvage started, an environmental survey was undertaken. A number of examples of endangered sedentary species were transplanted, with help from two Italian universities. With the conclusion of the operation, the grout cement bags are being recovered. The platforms and anchor blocks will be left in place to form artificial reefs.