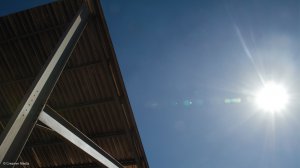 Solar technology and energy services provider SunPower on Tuesday plans to open a solar panel manufacturing facility in Cape Town in 2015 to meet the growing demand for solar technology in the region.

The plant, which would be owned and operated by SunPower, was expected to create up to 150 local jobs and would manufacture SunPower’s E20/440 solar panels, as well as house the company’s engineering, procurement and construction (EPC) and operations and management (O&M) offices, consolidating SunPower’s South African business in one building.

“SunPower has a significant presence in the South African solar market, including two large power plants built this year and another one that will begin construction soon. By manufacturing our high-efficiency solar panels at this new facility, we will not only help the local economy, but continue to deliver clean, renewable energy to this region,” SunPower COO Marty Neese said.

He added that the company’s investment into this new plant was part of its commitment to the local South African photovoltaic market and met SunPower’s objective of building a sustainable business through local investment and creating jobs in the medium and long term.

SunPower had, earlier this year, completed the construction of two ground-mounted solar projects totalling 33 MW near Douglas, in the Northern Cape, and had also been appointed as the preferred EPC and O&M contractor for an 86 MW direct current project in the third round of the Renewable Energy Independent Power Producer Procurement Programme by the Mulilo-Total consortium.