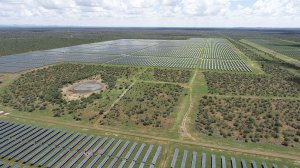 Solar tracker manufacturer STI Norland South Africa is optimistic about the solar market in South Africa, particularly as Bid Window 5 of the renewables programme was launched earlier this year and a 10 MW licence-exemption threshold for small-scale embedded generation has been proposed by government.

The company stands ready to supply the market with its proven STI-H250 dual-row solar trackers, after establishing its presence in 2013 and moving its office to Gqeberha, in the Eastern Cape, in October last year.

STI Norland South Africa forms part of the STI Norland group, which is a leading global supplier and is headquartered in Spain.

The STI-H250 dual-row tracker comprises two torsion beams that rotate simultaneously and are linked by one motor, which lowers supply and maintenance costs for customers.

The company has previously supplied trackers for the 94.3 MW solar photovoltaic plant being built in Sishen, in the Northern Cape, while having a global track record of 8.4 GWp

He highlights that sub-Saharan Africa is currently the company’s target market for dual-row solar trackers, with South Africa and Egypt being the two largest players.

STI Norland South Africa is geared up to produce at least 150 MW of solar tracker products every month, particularly through partnerships with local suppliers.

Palmer notes that 90% of the steel components for its dual-row solar trackers can be sourced locally to meet the legal requirements. The company places an emphasis on local content and would like to supply internationally from South Africa..

STI Norland, which has manufacturing operations in Spain and Brazil, did not intended to establish its own manufacturing facility in South Africa; instead, the group tapped into existing manufacturing infrastructure, as the expertise and capacity already exist.

“Steel is the largest component in STI Norland dual-row solar trackers and local manufacturing will reduce logistic lead times and costs to the continent while supporting local job creation.

“We will provide tooling and quality management and support the production process, while motors and controllers will be imported,” Palmer explains.

Moreover, STI Norland distinguishes itself in the market through value-add  services, such as performing analyses of terrains and making geotechnical recommendations. This helps reduce the number of civil works required on site and ensures for optimal design of the solar power plant, Palmer notes.

The company is currently producing the sixth generation of STI-H250 dual-row solar trackers, which have improved adaptability to complex, uneven terrains and irregular layouts.

This is particularly useful considering the Northern Cape’s rough terrain, where the majority of solar plant installations are taking place in the country.

“The dual-row STI-H250 trackers can accommodate sloped terrains and have a good coverage ratio,” Palmer points out.

He concludes that South Africa has excellent solar resources, good expertise to execute projects and key suppliers, including STI Norland, which all make up the ingredients for a potent solar power industry.