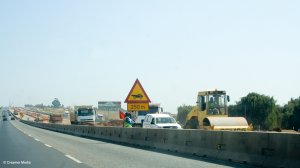 The board of the South African National Roads Agency Limited (Sanral) has instructed Sanral management to readvertise and award the R17.47-billion in tenders the board cancelled earlier in May, citing “material irregularities”, within the next four months.

Speaking at a media conference in Centurion on Monday, Sanral board chairperson Themba Mhambi added that the board would recruit an independent public institution with infrastructure expertise to assist with the process to advertise and adjudicate the tenders, and to make a recommendation to the board on the winning bidders.

This body has been identified, he noted, but not yet employed.

“This process has been soiled and its integrity has been compromised internally within Sanral,” said Mhambi. “We are clear as a board that prima facie evidence exists of people speaking to the very bidders from inside Sanral, based on the media articles we are seeing.”

The tenders which the Sanral board did not approve are the Mtentu Bridge Wild Coast project, on the N2, valued at R3.4-billion; the rehabilitation of the R56 Matatiele, in the Eastern Cape, at R1-billion; the N3 Ashburton interchange, in KwaZulu-Natal, at R1.8-billion; and improvements to the EB Cloete interchange (N2 and N3 connection point in KwaZulu-Natal), at R4.3-billion.

Sanral noted in an earlier statement that the tenders were cancelled owing to “a material irregularity in the tender process” where a resolution made by its board in January, 2020, was not implemented in the evaluation of the affected tenders.

Minister of Transport Fikile Mbalula said on Monday that he was awaiting a report from the board on the matter. He emphasised that it was important not to repeat the mistakes made during the State capture era, or to allow malfeasance for the sake of expediency.

Mbalula advised “those aggrieved” by the cancellation to challenge the decision in court.

2020 Board Resolution
Mhambi explained that all of the five cancelled tenders had one thing in common – the absence of the implementation of a resolution of the Sanral board regarding the separation of duties.

He said the board discovered in January 2020 that the construction contractor bid evaluation process within Sanral had a “major and potentially corruptive flaw”.

He said the process allowed the same service provider which developed the design drawings and technical specifications for projects (which are then advertised), to also be the party to determine, on a technical level, which bid would be recommended for award to the bid evaluation committee.

“Now if that is not a conflict of interest; if that does not have the potential to promote corruption, someone must tell me we are crazy as a board,” said Mhambi.

“In 2020 we said that the consultants involved in the drawing up of specifications should not be involved in the evaluation of the technical submissions by bidders. Let another independent engineering consultant look at the bids and make a recommendation.

“Then we discovered that our recommendation has not been affected, and we sanctioned the award of these tenders . . . as violating an internal control.

“Contrary to the board’s instructions in all the tenders at issue, the design of the project and development of the technical specifications was the same individual or entity which decided on the technical bids to be considered for award.

“One person doing all these things is extremely dangerous, as it effectively makes one service provider almost the sole determiner about who gets Sanral contracts. It flies in the face of a fair, equitable, cost-efficient and transparent procurement process,” said Mhambi.

“No one could guarantee that no collusion took place.”

Other Lapses
While all five contracts were found wanting with regards to the 2020 resolution, other lapses were also discovered in the Mtentu, Ashburton and the Open Road Tolling projects.

With the process to build the Mtentu bridge, a bid that should have been disqualified because it was not submitted in the prescribed format in terms of the specifications, was accepted.

This should not have been the case, said Mhambi.

The specifications also allowed for a flawed increase in the scope of work in order to accommodate the 30% subcontracting demand requirement, which effectively drew a line through this requirement.

“This deviation was done without the requisite board approval and was, therefore, irregular,” said Mhambi.

Yet another flaw was that one specific bidder was allowed to provide guarantees – “and not even secured – instead of implementing the principle of Sanral retaining money owed as “insurance against shoddy work or not completing work”, said Mhambi.

“All bidders have to be treated in the same way.”

Within the Ashburton tender, it was discovered that a bidder which was not supposed to be disqualified was indeed disqualified.

And, lastly, within the Open Road Tolling project, the 30% subcontracting requirement was dropped to 15%.

Within government, companies awarded large contracts must subcontract 30% of the contract value, with the emphasis on providing work to smaller companies and/or communities.

Consequences
The Sanral board is as concerned as anyone in the industry about the effects the cancellation of the tenders would have on the implementation of critical infrastructure projects in South Africa, as well as on the construction industry, said Mhambi.

“However, it cannot be said that the governance and procurement processes must be compromised at all and any costs.

“The State-owned entity (SOE) sector is still reeling from the consequences of cutting corners. Short memories in this regard are unfortunate.”

Mhambi added that the board was “determined” to get to the bottom of the lapses and irregularities, and to follow up with the relevant consequence management.

He also noted that the procurement processes within Sanral only allowed for board scrutiny of projects above R750-million, and that the agency would have to investigate any lapses in tender awards below this threshold.

Cesa Challenges Sanral Board Decision
Consulting Engineers South Africa (Cesa) issued a statement on Monday saying it disagreed with the Sanral board’s decision to cancel “critical infrastructure tenders” on the basis of the involvement of design engineers.

“There is a clear lack of understanding of the role of an independently appointed design engineer in the contractor tender adjudication process,” noted Cesa CEO Chris Campbell.

“A consulting engineer can be involved first in the design of an infrastructure project, followed by tender adjudication analysis and then possibly site supervision services – all acting as the trusted advisor to the client body, especially when a public sector client has limited specifically experienced resources.

“Failing to address such capacity challenges within the public sector in this manner will have significant consequences on our ability to leverage infrastructure development as a catalyst for our economic recovery,” said Campbell.

“The role of a design engineer is to provide independent advice to the client body acting as the owner’s engineer,” he added.

“The design or consulting engineer is distinctly separate from the contractor and is bound by a code of ethics and has huge risk exposure in performing this duty.

“In fact, an engineer in this position, found to be acting unethically, could put his company at risk of being expelled from Cesa and the individual responsible could be disbarred from providing such professional services by the Engineering Council of South Africa.”

The appointment of the consulting engineer, as the trusted advisor to the client, is distinct from that of the contractor, so there is no conflict of interest as alleged by the current Sanral board, stated Campbell.

“In many instances Sanral is not unique, many other public entities and SOEs have been adopting a similar approach and continue to do so, all with the same governance considerations and accountability, none of whom have been found wanting in this respect by the Office of the Auditor General.

“One therefore has to wonder whether the Sanral board resolution has been adequately informed by local and global best practice.”