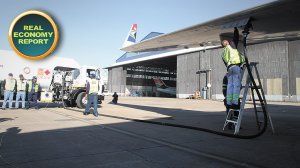 Project Solaris was launched in 2014, and was an effort from SkyNRG, Sunchem SA, SAA and Boeing to develop sustainable biojetfuel from the Solaris crop.

The SAA and Mango flights carried 300 passengers from Johannesburg to Cape Town on Boeing 737-800’s powered by a fuel blend made up of 30% aviation biofuel and 70% fossil fuel.

Anine Kilian:
He added that South Africa used to have a very large tobacco industry and pointed out that that industry had largely collapsed.

Morgan said South Africa had a long-standing policy of supporting renewable fuel development and that Boeing, SAA and the South African government had been working closely over the past three years, since the inception of the collaboration, to help develop further technologies and supply chains.

Anine Kilian:
Meanwhile, Friday also saw the launch of the Southern Africa Sustainable Fuel Initiative, which entailed a stakeholder and sustainability plan to ensure a long-term domestic fuel supply for SAA and other regional fuel users.

The goal of the initiative is to scale up over the next several years to gain additional biofuel capacity.

If successful, farmers would be able to tap into local and global demand for certified feedstock without adverse impact on food supplies, fresh water or land use.

Boeing and SAA launched their sustainable aviation fuels collaboration in 2013, followed a year later by Project Solaris being announced as the first focus project to convert oil from the Solaris tobacco plant seed into biojetfuel.
In 2015, farms in Limpopo achieved certification from the Roundtable on Sustainable Biomaterials (RSB), one of the strongest sustainability standards in the world.

RSB certification provided a model for expansion of Project Solaris to larger-scale production.

SAA aimed to have half its fleet using biofuel by 2022