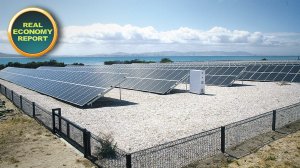 For years, Robben Island has served key purposes – from being a leper colony, to a political prison – to now being a World Heritage site and a prime tourist destination.

The island receives more than 300 000 visitors each year, uses almost two-million kilowatt-hours of electricity every year. The electricity, in particular, fulfills residential needs, as more than 100 people live on the island.

Other power users are the harbour and offices, as well as the desalination plant, which uses the majority of the energy.

However, the installation of a new solar photovoltaic microgrid system is expected to make a significant change to the island’s power supply.

The microgrid will produce almost one-million kilowatt-hours of electricity a year.This supply is almost half of the island’s yearly electricity requirement.

According to Technology provider ABB South Africa and Southern Africa MD Leon Viljoen, the microgrid system is the ideal solution, not only for the environment, but also from a business perspective.

Viljoen also emphasised the importance of microgrids in providing access to electricity.

ABB South Africa and Southern Africa MD Leon Viljoen:
Over a billion people in Africa and India don’t have access to electricity. By putting in microgrids, we basically creating the opportunity to give them power and energy at costeffective prices and also in the shortest possible time.

Mia Breytenbach:
EPC contractor Sola Future Energy was appointed by the Department of Tourism to design and build the microgrid for Robben Island.

These elements are the solar photovoltaic farm, the battery bank and the diesel generators.
The solar PV farm has 1 960 monocrystalline modules that total 666.4 kW power supply.

The battery bank comprises 2 420 lithium-ion battery cells. The bank is able to store 837 kWh and output a maximum of 500 kVA.

The diesel generators are used when no solar or battery storage is available.

ABB supplied the solar inverters that convert the variable direct current (dc) output from the solar panels into the alternating current (ac) required for electric utilities.

ABB used the Microgrid Plus system, that basically controls all the types of energy, and selects which energy must be used at what stage.

And what was installed here is the PV the solar farm as well as the battery storage system.

The communication that is used here is a wireless system, that communicates between the control system, and the solar plant that is on the other side of the island. So, there is no cables being laid between the two for communications as well as the information goes into the cloud.

And the control and monitoring of the system is done in Cape Town, which is 9 km away and also without putting any cable in the sea for communication. So I think that definitely makes it a much nicer and environmental-friendly solution.

Viljoen also emphasised the economic benefits of the microgrid installation, particularly in terms of diesel savings.

However, it is not only the cost of diesel that can be saved, but also the transport of the diesel to the island, as well as the servicing of the diesel generators. So it is a huge cost saving for them, so the payback period is quick and after that it is pure savings for the island.

Following the success of the Robben Island microgird, ABB continues to be nvolved in the roll-out of this technology across the continent.

ABB South Africa and Southern Africa MD Leon Viljoen:“We work with various EPCS across Africa, to be able to bring various solutions to the various countries. We already implemented two microgrids in Kenya and are speaking to various governments and utilities to implement it in their countries.”

To date, ABB has installed more than 40 microgrid installations around the world. These systems serve remote communities, islands, utilities and industrial campuses.

And now a World Heritage Site can be added to the list.