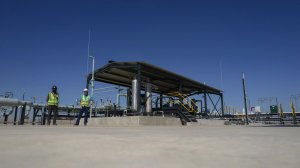 While the South African helium market is small, helium is sought after in the international market, which has created a good opportunity for dual-listed helium, liquid natural gas (LNG) and compressed natural gas producer Renergen’s Virginia gas project, in the Free State.

Helium is found at a handful of sites globally, varying in concentrations. Qatar’s helium production is at 0.01% helium in the gas stream, while the US is the highest producer in the world at 0.35%.

“Our average in the Free State is 3.4% and we've had wells clock in at 12%, which makes us the richest helium gasfield globally,” says Renergen CEO and MD Stefano Marani.

The high gas concentration is a result of the Vredefort asteroid that hit the ground near the current Vredefort area about two-billion years ago.

Helium is a by-product of radioactive decay, which is why there is a high concentration in the area.

“The opportunity is big because there is an enormous deficit between supply and demand,” says Marani.

Helium is an important and irreplaceable element in multiple industries. The gas is used for space exploration, rocketry and high-level scientific applications. In the medical field, it is used in magnetic resonance imaging machines for cancer screening amongst other things, explains Marani.

For the past four decades, the world’s supply and demand were in a state of equilibrium, with about half of the world's helium being supplied by the US.

However, it took the US about seven decades to build up the reserve.

With half of global helium supplied by new sources and the other half from the US built-up reservoir, the price of helium was artificially low.

When the reservoir ran out in 2018, it resulted in a massive gap between supply and demand, which has consequently created a good opportunity for the development of Renergen’s Virginia gas project, explains Marani.

The project comprises exploration and production rights of 187 000 ha of gasfields across Welkom, Virginia and Theunissen, in the Free State.

The project is set to introduce South Africa as the eighth country in the world to export helium.

Renergen is bringing the first phase of the project on line, which involves the production of about 350 kg/d of helium and about 2 500 GJ/d of energy.

Renergen is conducting drilling studies to determine the outline of Phase 2, which it hopes will bring a substantial project on line.

Project expansion will be done in stages. The construction’s first stage will entail connecting the existing wells to a new gas pipeline and constructing a new helium and LNG plant.

The plant will be the first liquid helium processing technology in the country.