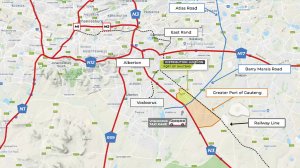 Investor and developer NT55 Investments believes the Distribution Junxion development – a proposed inland port and railway park in Gauteng – will transform the country’s rail and transport logistics landscape through its efficient supply chain performance and the considerable cost savings it will engender.

NT55 Investments director Francois Nortje told the media during a briefing on Tuesday that the company owns considerable portions of the land on which the proposed development will be built. This includes 107 ha on the railway line, 80 ha along the N3 highway, about 20 ha along Barry Marais road and a further 60 ha that has been earmarked for future development.

The company’s intention is to develop this property into “the most significant inland logistics and distribution hub in Southern Africa”, he said.

NT55 plans to develop a landscaped logistics parks, one rail and one highway park with optimal traffic flows that include wide double-lane roads and large turning circles.

Nortje indicated that Distribution Junxion offers unique features that provide it with a competitive advantage, mainly, its optimal location, topography and scale.

As with a seaport, the port sits on the entry and exit points for imports into and exports out of Gauteng.

The port will comprise at least 1.2-million square metres of gross lettable area. It enjoys prime location within the “champagne positions of logistics” – positioned to reduce double travel, as goods will not be required to travel past their entry point and be transported back again.

A portion of the railway park has capacity for warehouses. The flat land of the port – with a land gradient of only 2 m over a distance of 1.2 km – is ideal for the development of large warehouses, upward of 50 000 m2, which will result in considerable cost savings on rentals, as it can be developed at a cheaper cost, given that the land does not have to be levelled.

Nortje indicated that given these specifications, the company will be targeting large multinationals to build and lease warehouses, with interest already being shown.

The shape and length of the land is noted as ideal for the construction of an efficient mega-rail terminal.

NT55 is offering operators the opportunity to manage, operate and/or lease the rail terminal.

It is located where the N3 and the Durban/Johannesburg railway line are closest to each other, and is connected by a major arterial road, creating an extremely efficient intermodal swop, the company stated.

The Rooikop station is positioned after the megaterminal, and Glenroy station is just before it. Nortje highlighted these as important facets, given that both of these have large shunting yards where trains can dock if many arrive at the same time.

The railway park is expected to contribute to increasing rail transportation volumes on the Johannesburg/Durban corridor, on the premise that the corridor is effectively faster and cheaper than road transport.

By developing two full-length 750 m spurs, Railway Park has the potential to turn around 1.6-million containers a year.

For scale, the total number of containers coming in and out of Gauteng is about 1.6-million a year.

Turning around a full block train within an hour also saves on costs by reducing rolling stock.