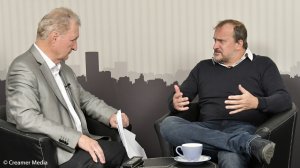 JOHANNESBURG (miningweekly.com) – President Cyril Ramaphosa is correct in stating that South Africans need to act together with urgency and boldness if they are to realise the economic opportunities before them, Eunomix CEO Claude Baissac said on Tuesday.

Baissac, who was speaking to Mining Weekly Online following the finding of Eunomix that South Africa's performance in the past 12 years was the worst for a country not at war, was commenting on a pre-election op-ed written by the President in the Sunday Times, in which he stated that for the first time in a decade, South Africa was in a position to grow the economy much faster and create many more jobs. (Also watch attached Creamer Media video.)

In the article which appeared on the page 19 of the May 5 edition of South Africa’s largest-circulation publication, President Ramaphosa wrote that through the economic stimulus and recovery plan announced last year, the country had embarked on structural reforms in sectors including mining, tourism, telecommunications and agriculture, and was making efforts to build a comprehensive social compact among key role players to create conditions for meaningful economic revival.

“But we need to act with urgency and boldness – and together – if we are to realise the opportunities before us,” the President added.

In concurring, Baissac said a few strong signals and a few simple but effective regulatory steps by the President would engender the confidence for investors to begin investing again and consumers to begin consuming again.

“That’s what this President needs to do to get things started. If he does that, then we can start talking about the more long-term structural activities and actions that we need to take to remove the real constraints to growth – education, social capital and universal health care.

“The role of the State is to protect all citizens equally and to make sure that these citizens, under one mechanism or the other, have freedom, safety, hope, education and opportunity in a system that it not grievously unequal.

“We need to arrive at a new social compact. The private sector must be allowed to play its risk-taking role of employing capital, labour and technology. This must be done in a way that creates revenues that can be taxed and the taxes used by the government to fund critical investments.

“Let’s get beyond the idiotic, exhausted, old, passé debate about capitalism versus Marxism. South Africa is better than that. We can innovate. We can find a new form of public-private partnership.

“If there’s one thing South Africa has learnt from its own history is that in the worst moment, it can come together and work together,” said Baissac, who provides advisory and consultancy services on country risk, strategy and sustainability to mining companies.

“It’s possible to have a market-friendly economic policy that is social at the same time,” he said.

“That would be money saved by the mining industry because it would not have to deal with a permanent state of unrest and misery, poverty and alienation that exists in communities.

Among many other key points made by President Ramaphosa in the Sunday Times article were that:

Baissac urged the government to work swiftly on reforming tourism, from which significant benefits could be derived in the very short term.

President Ramaphosa wrote in the Sunday Times article that the government was taking steps to increase the tourist footprint in townships, as well as interesting tourist sites in rural areas. A greater number of tourism operators from within the ranks of the previously disadvantaged was also being targeted, the President added.