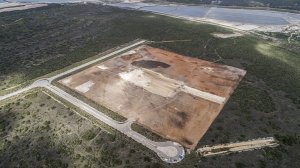 The 20 ha Port of Ngqura Tank Farm site has been cleared of vegetation in preparation for bulk earthworks. Platform preparation has started in the centre of the site. TNPA has already completed the main access road from the N2.

Transnet National Ports Authority (TNPA) and Oil Tanking Grindrod Calulo Holdings (OTGC) say they are on track with developments at the Port of Ngqura, in Nelson Mandela Bay, with the commissioning of the new liquid bulk tank farm planned towards the end of 2020.

TNPA says environmental search and rescue activities have been completed by Zingce Environmental Solutions, which was awarded the contract in November last year. Additional environmental services were undertaken by Keokoma.

The environmental activities to prepare the site for construction included the removal of indigenous and endangered plants and animals.

TNPA states that about 6 000 plant species were rescued and relocated to a temporary nursery site and other protected open spaces in the port area between 2016 and 2018.

In March, another 1 567 plants, representing 41 different species, as well as various mammal, reptile and inspect species were successfully relocated.

OTGC has also completed the archaeology report on the site. Palaeontology inspections and bulk earthworks for the ground and platform preparation are ongoing.

Meanwhile, three of the main construction work packages have been awarded.

The scope of work at the port includes the construction of bulk storage for up to 60 000 m3, 3.5 km of pipelines to link the tank farm and the port’s Berth B100, a liquefied petroleum gas line servitude and the port entrance plaza, besides others.

It also includes the installation of surveillance cameras and an access control system, electrical substations and lighting, perimeter security fencing, data and telecommunications infrastructure and a fire fighting system at Berth B100.

Future development will result in bulk liquid storage being expanded by up to 790 000 m3.

To date, contracts have been awarded to joint venture company Toro Ya Africa Socrasync for the port entrance plaza, SA Five Engineering for the Berth B100 fire fighting system, Phila Environmental Health & Safety for environmental specialist duties, Falcon for site security, JNR Lapere as the health and safety agent and CSV Construction as principal contractor for bulk earthworks.

“The new tank farm in the Ngqura port will demand the decommissioning of the existing liquid bulk facilities in the port. After commissioning of the facility, the Port Elizabeth Tank Farm operators will wind down operations over a four-month period, which will be followed by rehabilitation,” says TNPA.

The ports authority adds that it and the operators are finalising a decommissioning and remediation plan, which has to be approved by the Department of Environmental Affairs.

TNPA estimates the decommissioning and rehabilitation of the existing liquid bulk works to take between 36 and 48 months.