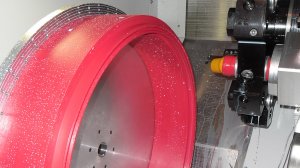 Although rubber is a cheaper alternative in the manufacturing of seals, many contractors are using polyurethane, as it remains sturdy in abrasive environments, which far outweighs cost concerns, he points out.

Further, Ehinger highlights that HPU features include “exceptional durability, with excellent wear resistance, a high level of tear strength and good elasticity”, adding that it is resistant to pure aliphatic hydrocarbons, such as butane, acidic or alkaline compounds, impurities, moisture and alcohols; mineral oils and greases; silicone oils and greases; hot water; ozone, oxidation and ageing; and synthetic esters, which can affect product life.

Another benefit is that seals are manufactured with little setup costs and in a much shorter time. Seal & Gasket Supplies produces seals and parts ranging from as small as 4 mm inside diameter to a little more than 700 mm outside diameter in usually less than 24 hours from receipt of order, he says.

Larger diameters of up to 2 500 mm can also be manufactured, but Ehinger notes that it generally requires longer lead times.

He adds that the demand for seals to be manufactured in HPU has steadily increased, with several customers requesting this material as their first choice.

Further, the company reports that it is also focusing specifically on creating awareness of the benefits of using HPU material in seal manufacturing.

While HPU is predominantly used in the manufacturing of hydraulic seals, wipers, bushings and O-rings, Ehinger says Seal & Gasket Supplies focuses on using HPU to manufacture seals in the hydraulic, mining and earthmoving sectors, where water contamination is a common cause of seal failure.

As the material also carries European Food and Drug Administration approval for foodstuffs, it is often used for seals and other components in food and beverage production processes, he says.

Although the HPU material is imported from Europe, Seal & Gasket Supplies manufactures the sealing product from this material locally.

Moreover, Ehinger emphasises the importance of innovation when designing sealing products to customer requirements, as companies are consistently aiming for ways to enhance their productivity and accuracy.

In light of this, Seal & Gasket Supplies has also acquired the Seal Master 700, in October 2012, a machine that enables the company to customise sealing solutions in a variety of designs and diameters, and manufacture a new range of hydraulic seals to meet the demand for hydraulic cylinders that the industry needs for improved performance.

Industry Needs Ehinger points out that service innovations can significantly boost growth, employment, productivity and competitiveness in the seals and gaskets industry, stressing that more attention should be paid to this area of entrepreneurship.

Further, he stresses the importance and value of enhancing service life cycles through training in aspects such as identifying system leaks.

“We have seen an increasing demand for reliable sealing to reduce leakage,” Ehinger says, noting that leakage can occur when incorrect replacement parts are fitted, owing to the perceived lower cost of using cheaper seals and parts. However, the cost of using incorrect parts is higher, owing to damage caused to equipment because of premature failure or incorrect specification, he adds.

In most instances, the quality of a seal is directly associated with the quality of the material, while overall lip design and operating conditions, such as temperature and pressure, as well as correct seal selection, play a vital role in seal performance and reliability, Ehinger says.

Other key focus areas include equipment and seal maintenance, which are becoming increasingly important to reduce breakdowns and downtime, as well as increasing the life span of equipment or components, which requires training and education for the end-users, he asserts.

“End-users and customers must understand the cost implications of using products that are high maintenance and thus the importance of using high-quality sealing products, and products or materials that are durable.”

End-users must also understand the application of products on which they use sealing technology to prevent any problems, such as shaft misalignment, which accounts for 50% of all costs associated with breakdowns, Ehinger says, citing preventative maintenance as one of the best ways to avoid costly downtime.

“Understanding the potential causes of seal failure can help prevent unplanned maintenance; once predictive maintenance is implemented, companies can reduce and enhance inventory levels of spare components,” he concludes.