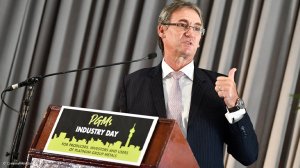 Speaking at the Platinum Group Metals (PGMs) industry day, Griffith said that the work done by the platinum jewellery promoting organisation, Platinum Guild International, had proved that jewellery investment was able to deliver the equivalent of three mines a year of the size of the Mogalakwena mine in Limpopo.

But currently, more needed to be invested to promote platinum jewellery in China to avoid losing the equivalent of a medium-size platinum mine every year.

The second quickest return, Griffith said, was the stimulation of demand by encouraging investment in platinum as a metal.

This is being contemplated through the promotion of a platinum coin and encouraging additional investment in platinum bar, which is promoted by the World Platinum Investment Council.

At the same time, industrial demand stimulation was also showing pleasing growth, with the adoption of platinum catalysed hydrogen fuel cells something that could now be spoken about credibly.

Earlier this year, Amplats took analysts and journalists to China to show how the use of hydrogen fuel cells is on the increase, especially in heavy-duty trucks.

He described the South African platinum industry as being on the cusp of another structural change that could be positive or negative.

“In our world, it doesn’t have to be up to fate. We need to invest now in further demand creation and reap the rewards,” he said.

In response to Citi mining analyst Johann Steyn and Nedbank mining analyst Leon Esterhuizen, he said investment in demand over a 30-year period had only resulted in two years when there had not been a positive demand from investment.

Investment in platinum exchange traded funds had been constant even when the platinum price was down, which meant that more metal was going into private hands.

“The solution is all the sources of demand, and we can move the dial on so many of them. Very few industries have our potential. We have the best opportunity to take scarce dollars and invest in demand.

“If supply takes a delayed time to catch up, we can reap immense profits,” Griffith added.