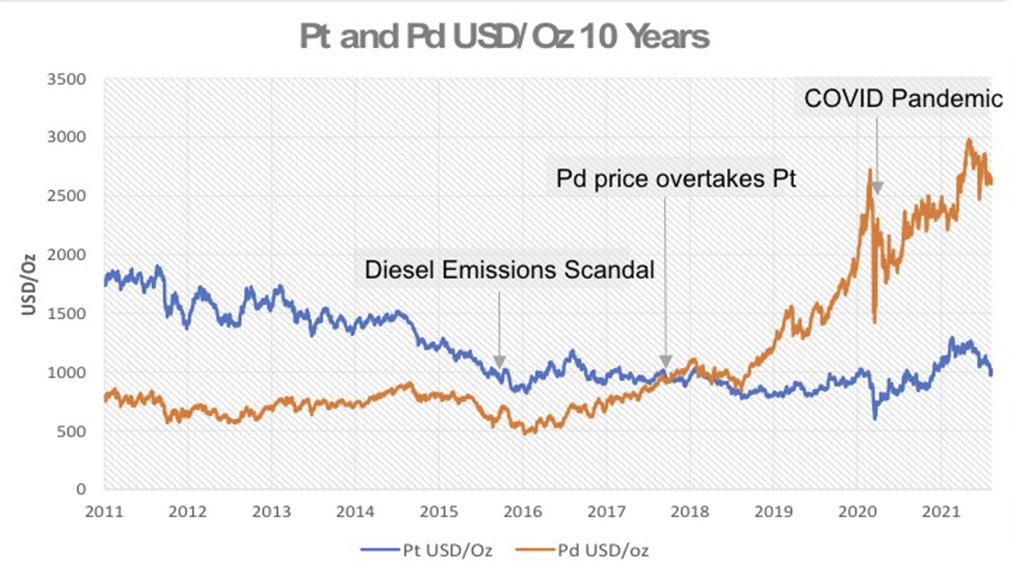 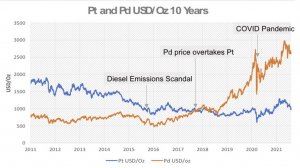 BUMPY ROAD Palladium has been more valuable than platinum since 2018

Mining consultancy company the MSA Group says platinum group metals (PGMs) price recovery has benefited mining operations in Zimbabwe, in that the price recovery has been largely towards palladium rather than platinum, consequently resulting in renewed focus on the industry.

Palladium has been more valuable than platinum since 2018, with platinum prices struggling to sustain levels higher than $1 000/oz since the diesel emissions scandal in 2015, compared with the current palladium price of about $2 600/oz (palladium is more important in petrol engine autocatalysts). The extraction of palladium is particularly beneficial for Zimbabwean operations, given the relatively high proportion of palladium in the Zimbabwean Main Sulphide Zone (MSZ) ore.

The South African Merensky and upper group 2 (UG2) reef ores contain less than half the amount of palladium than platinum, whereas in the Great Dyke of Zimbabwe, the split is more favourable at close to 0.8 oz of palladium for every platinum ounce mined.

For South African operations, JSE-listed Anglo American Platinum’s (Amplats’) Mogalakwena mine, in Limpopo, has benefited the most from the recovery in PGM prices, as the mine has a higher proportion of palladium than platinum.

More recently, exceptional rhodium prices have benefited South African UG2 producers, as that ore is relatively rich in rhodium, especially when compared with the MSZ ore in Zimbabwe.

“Higher prices have allowed various expansion and optimisation projects to proceed with confidence, and there has been some acceleration in that area,” says MSA Group mineral resources head of department Jeremy Witley.

In terms of opportunities in Zimbabwe, Witley tells Mining Weekly that the current production in Zimbabwe is dominated by South African-domiciled companies, with PGMs producer Impala Platinum owning the largest operation.

Impala Zimplat’s Ngezi mine produces almost 60% of Zimbabwe’s one-million-ounce-a-year production of PGMs. The Mimosa mine, a 50:50 joint venture between Impala Platinum and mining major Sibanye-Stillwater, produced about 250 000 oz of PGMs in 2020, followed by Amplats’ Unki mine, with about 180 000 oz.

“Zimplats has considerable potential to expand into deeper areas at Ngezi and the potential to reopen its nearby Hartley mine,” adds Witley.

Further, there are two relatively new entrants to the PGMs industry in Zimbabwe, he notes.

The most notable is Great Dyke Investments, jointly owned by a Russian company and a Zimbabwean entity. Its Darwendale mine, which is also in the Hartley Complex along with Ngezi, is developing two mechanised decline shafts and is expecting 860 000 oz/y of PGMs during operations.

The Todal Bokai platinum mine is located close to Amplats’ Unki mine and is majority owned by global diversified resources company Eurasian Resources Group (ERG) Africa, together with State-owned mining company ZMDC.

“It was recently reported by Bloomberg that the “use it or lose it principle”, which allows the State to repossess idle mining claims, was being considered, which, together with high prevailing PGM prices, may give ERG the impetus for further development of Bokai.”

The project, with potential to approach the scale of Unki’s production, was put on hold several years ago owing to low prevailing PGM prices. However, two declines were partially developed and the project could produce some PGMs ore relatively quickly once it resumes, explains Witley.

“These two projects alone have the potential to double Zimbabwe’s PGMs production within the next decade.”

He adds that there is potential, outside of the producing and near-term project areas, possibly in more technically challenging areas of the Great Dyke, to still attract investment for future sector-expansion.

“Other potential entrants to the industry include some Chinese entities, while South Africa-based integrated resource group Tharisa has recently expressed an interest in the sector.”

Witley says that the PGM operations in Zimbabwe have been minimally affected by the Covid-19 pandemic.

There was less necessity to shut down operations than was the case in South Africa, as the operations are mechanised and workers are not transported underground in cages in vertical shafts. This makes physical distancing easier and the transmission risk is lower.

“Vaccines became available to the population earlier in Zimbabwe than in many African countries, including South Africa, which assisted in reducing transmission rates and illness. Various improvement projects, that were implemented pre-Covid-19, actually resulted in the operations generally increasing PGMs ounce production, with large revenue gains, owing to the more favourable PGMs price,” he concludes.