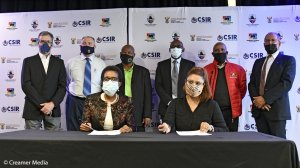 Representatives of the Mandela Mining Precinct (MMP) and five labour unions on October 26 signed an agreement on the terms of reference for the parties to collaborate on modernising the South African mining industry, resulting in the formation of the MMP – Organised Labour Consultative (OLC) forum.

The MMP – OLC forum is designed to facilitate stakeholder participation in the research and development planning required for a modernised mining industry at a strategic and policy level.

The inclusion of organised labour has been long anticipated and was initiated through the South African Mining, Extraction, Research, Development and Innovation, as well as the Successful Applications of Technology Centered Around People programmes.

This, the MMP says, goes some way towards ensuring meaningful involvement of organised labour in the modernisation agenda.

Minerals Council president Nolitha Fakude says organised labour is the voice of one of the largest stakeholders in mining – its 450 000 employees.

“It is critical to have unions meaningfully involved in the modernisation journey and it is vital that unions recognise that modernisation of mining is an imperative to extend the lives of mines, save current jobs in mining and create new opportunities in South Africa.”

The MMP – OCL forum will engage regularly with the management of the MMP on current research, deliverables and future projects.

He adds that the collaboration is historic because it is the first time that organised labour, as a “critical stakeholder in the modernisation journey”, will actively participate in research, development and innovation (RDI) initiatives in South Africa.

“Their inclusion in, and signing of the terms of reference, demonstrates their commitment to global competitiveness of mining, not only [in terms of] economic metrics, but also on the very important environmental, social and governance measures, through modernisation,” he says.

Van der Woude notes that the signing ceremony marks the commitment between all stakeholders to work towards a more sustainable mining industry that contributes positively to a better world for individuals and society at large.

Solidarity general secretary Gideon du Plessis says progress, as well as the sustainability of the mining sector, is of the utmost importance, not only for the South African economy and job creation, but also for the creation of job security within the sector for those already employed in the sector.

“For Solidarity, the latter is of particular importance as Solidarity has quite a number of members in the mining sector and is committed to working on solutions to ensure the survival of this sector.”

He adds that the agreement could also serve as a blueprint for other economic sectors regarding the way in which trade unions and industry players can work together in the era of the Fourth Industrial Revolution. As such, Du Plessis emphasises that such cooperation holds various benefits for employers and employees alike.

“We concur that the modernisation of mines should be a people-centred process, with safer mines, where machinery performs the work in areas where employees’ safety and health are endangered, being the main benefit. Similarly, the life of a mine can also be extended by using modern mining methods,” he says.

However, Du Plessis says it is important that this agreement should be of particular benefit to individual miners. “Apart from a safer work environment, we also believe that modernisation can create opportunities for skilled workers to earn better pay. In this way, Solidarity could then act as a partner on behalf of its members to bring about a better future for mining in South Africa,” he says.

Meanwhile, as a model for greater collaboration in an innovation ecosystem, the MMP has already brought together industry players – from companies to original-equipment manufacturers, as well as academics and academic institutions – to find implementable, “game-changing” solutions to some of the mining industry’s toughest challenges, the precinct notes in a statement.

MMP – a public-private partnership between the Department of Science and Innovation and the Minerals Council – was launched in 2018 with the aim of revitalising mining-related RDI in South Africa to ensure the sustainability of the industry.