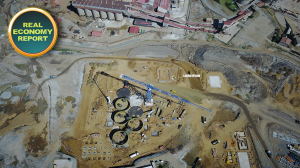 The project started producing in September 2018 and uses a conventional carbon-in-leach circuit with a proprietary pre-oxidation process. It delivered in excess of 15 000 oz of gold in its first four months of operation. Given the project’s relative success, management saw fit to increase its output. Elikhulu operations manager Oriel Shikwambana explains.

The commissioning of the final tank is scheduled for the end of February. This expansion, combined with tweaks to improve the recovery process, should see Elikhulu delivering 70 000 oz of gold in its first full year of production.

Meanwhile, the completion of Phase 1B of the new tailings storage facility is expected to be completed by April.

Shikwambana points out that the retreatment of the three existing slimes dams, Kinross, Leslie/Bracken and Wikkelhaak, will result in the residues being re-deposed to a single tailings storage facility site, which will reduce Pan African’s ecological footprint.

Mining and metals company South32 says it is concerned about the challenges that have increasingly threatened the stability of South African power utility Eskom and needs to ensure the continuity of supply of its coal to Eskom in the long run.