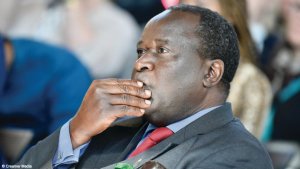 "The decision by Fitch and Moody's ... is a painful one," Finance Minister Tito Mboweni said in a statement.

There is an urgent need for government to implement structural economic reforms to avoid further harm to the country's sovereign rating, he said.

With the Covid-19 pandemic worsening, South Africa's tax revenue is falling as the economy contracts, while spending to contain the spread of the virus and cushion its impact on the poor has increased.

At last month's mid-term budget, the National Treasury forecast South Africa would record a budget deficit of over 15% of GDP in the fiscal year ending March 2021, the highest in post-apartheid history.

Africa's most industrialised nation currently has a debt of nearly 4 trillion rand ($260 billion), or 63.3% of the GDP. Its debt-to-GDP ratio is expected to swell to over 90% in three years, the worst such increase in the world.

With the ratings downgrade, the cost of borrowing and servicing the debt will increase and the government will either have to cut back on social spending or tax more, the National Treasury said, at a time when almost a third of the population is unemployed.

"Continuous rating downgrades will translate to unaffordable debt costs, deteriorating asset values (such as retirement, other savings and property) and reduction in disposable income for many," it said, referring to the impact on South Africans.

Market reaction to the downgrades are likely to be muted, said Razia Khan, chief economist for Africa and Middle East at Standard Chartered Bank.

"Reform momentum [of government] is looking more positive near term," she said, but cautioned it is fraught with challenges.