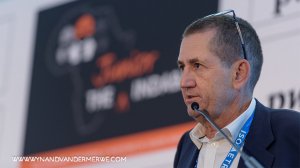 JOHANNESBURG (miningweekly.com) – To have one-size-fits-all mining legislation is ill-conceived, mining luminary Bernard Swanepoel said on Tuesday in his opening address to the Junior Indaba.

Swanepoel pointed out that Canada and Australia were benefiting from a disproportionate slice of global exploration investment because they were incentivised, whereas South Africa’s intended mining incentive had had the unintended consequence of incentivising the building of more shopping centres, but had failed to incentivise exploration in South Africa, a country with a deep history of mining.

He flashed on to the screen an abundance of collated global statistics on the issue of mining-related permits, but lamented the absence of access to statistics in South Africa and expressed concern about perceived permit corruption.

“We’re concerned about the fraud at permit level,” he told the Junior Indaba, which is being covered by Mining Weekly Online, and queried the whereabouts of permits issued in 2011, which should now have lapsed and should be available again in terms of the ‘use-or-lose’ principle.

“Where are they? How is that, as a country, we don’t know how many permits have been issued? There must be a large number of permits that should have recirculated,” he said.

He urged that something different be tried and permit value was not at a level that would prompt gatekeepers to use their issuing as an opportunity to elicit bribes.

“We’re in competition with the rest of the world and I state that categorically,” Swanepoel maintained.

He complained about the hurdle being pitched too high for exploration companies and said that this put gatekeepers between exploration aspirants and success.

“We play to an audience that is never going to give us money,” he said, urging that he be made a politician for a day so that he could attune the regulatory environment to the needs of start-ups.

Digi audience voting showed that a minority of the 300 attendees were explorers and most were operators.

The digi voting of 80% of the respondents stated that change in South Africa had not flowed through to regulations.