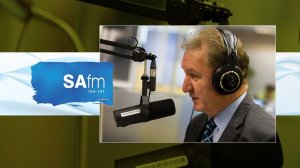 Preslin: At last, sunny South Africa will be permitted to generate as much electricity from the sun as South Africa needs.

Creamer: I’m jumping for joy at this, because there are a lot of people that were reluctant in government and we had hesitation on the renewables. But, the renewables are the way to go. We have superior sun, does anybody doubt that? We have prime wind, so we can use the sun in the day and the wind at the night.

ou can have battery storages moving very fast, we can solve this problem. One of the most beautiful aspects of the State of the Nation address (SoNA) was that the President of South Africa Cyril Ramaphosa understands the problem in detail. I mean, he ticked the boxes like you can not believe, which can only prove that we are going to move out of this crisis. He wants to move ahead with the Integrated Resource Plan. We have been waiting for that and he is saying now it is going to go ahead and over we can go over 1MW. We see so many mining companies just wanting to put the money in there themselves.

Preslin: By this time next year, Harmony Gold will be generating 30 MW of its own solar power in the Free State and planning to do another 40 MW.

Creamer: That is just one company. They’ve said the moment the obstacles have moved away they will go ahead. That is in Welkom in the Free State. They have been planning this for a long-time, as other companies have. But, already they are whispering to us that they need so much more and they already have got another 40MW on the board.

Preslin: The Australian government is giving cash grants worth millions of dollars to mines prepared to generate their own electricity from the sun and the wind.

Creamer: South African mining companies are global so they are in other areas. Now, Gold Fields, it is in Australia. When it put its bid in to have the South Deep mine in Gauteng having 40MW, it also put a bid in in Australia. The Australia one is already built. That is how slow we are. And, it is built with Australian money.

So, you have got South African companies there and the government comes running along, not with red tape, but with a red carpet, and they hand you cash and you can pay them back over a long period. So, it is a soft loan. Already going at their Agnew mine in Australia is a renewable, clean plant, what the world needs. They are prepared to do a lot more here. You can see that they are champing at the bit as well to do it at South Deep.

South Deep is a Gauteng mine that needs to have lower costs. We see that it is now broken into profits. It is a huge big million ounces of gold, can you imagine 38-million ounces of gold. Let’s get it out of there at a profit. Now it is doing so and if it can bring down its electricity prices, it will be sustainable. That is what is so beautiful about self-generation with these mines. They face 500% increases from Eskom over a period of 12-years or so. I mean the tariffs have just rocketed. They have had to deal with that.

Now, they can actually have a hedge against high prices, because they put their own self-generating capacity in, which means that they will really be lifting that at the rate of inflation probably and they can add to it now, because it is limitless as we can see from the SoNA.

Preslin: If we are going to have so much power from solar as well as wind, what are we going to do with the ample coal reserves that we have available?

Creamer: Coal is beautiful. I’m looking now at the lights, what are we going to do? We still have got to have a transition period, so we have got to have this coal. We are the world’s most dependent country just about, on coal. So, you can’t just wipe that out overnight.

Also, your economy is growing, so you have got to cope with this slow movement and it has got to be a just transition, as we said. We know that you can do a just transition. Already, the mining companies that are doing coal mining are looking at their soils, community and people that work on their mines. Do they need to move them to where they are now producing renewable energy?

They probably would like to, but not all of them would want to go. You can keep them there, they can check on the soils and will be able to grow amazing crops. The people who are now mining could be turned into farmers and the community there could turn into great agri-processors. I mean there is a lot of opportunity, we’ve got to grasp it and we’ve got to go for it in this world.