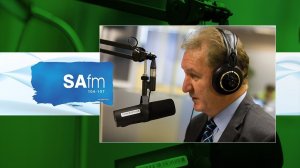 Creamer: This is Royal Bafokeng Platinum, and you have to look at the word “Bafokeng” because this community has been very astute. More than 100 years ago, they realised that you have to have title deeds in your hand; it’s no good just occupying land – you must own that land.

And they sent an impi to the Kimberley diamond mines, in Kimberley, and that impi collected enough money and came back with enough money to buy that land. The purchase of that land was so brilliant – it was probably the best purchase in the history of Africa because under the land bought, was a treasure chest of platinum-group metals.

Now, this particular Royal Bafokeng, that was listed ten years ago, wants to generate its own electricity from the sun. It is doing so against the background of having a disadvantage of the Stage 6 load-shedding last year, when it could not send its workers underground.

Of course, that really hits the pocket of a mine.

So, we’re seeing them now, going out, and they probably will be a 6 000 000 oz producer in a few years, and they have got those wonderful palladiums and rhodiums, which the world is craving for to clean its air.

Kamwendo: Royal Bafokeng Platinum has a policy of giving all its employees the opportunity to fund their own dignified homes.

Creamer: Yes, they’re smiling about this. When you go to their presentations at the Johannesburg Stock Exchange, shoulder-to-shoulder are the National Union of Mineworkers.

The mineworker representatives are also there, smiling. One of the things that they talk about and use the words “dignified housing” because these are three-bedroom homes, and what they do is clever because they’ve got a funding arrangement which doesn’t hurt the actual operational needs of the mine.

In other words, you don’t dig into money that is needed for mining, you go out and borrow – which they did from the PIC. They’ve ringfenced that and make sure that when their mineworkers work for them, they have a chance of having their families living nearby with them, and they also own those houses and they do it in a way that they pay off a certain amount every month, ending up the actual owners of that property.

So, we can see property ownership is a big thing with the Bafokeng community and I think that has been a great source of wealth-generation for that community of about 350 000 people.

Creamer: For 130 years, the way we mined was to take a big drill in your hand and we had very muscular rock-drill operators who would have handheld equipment and they would drill into the rock and then you would have a drill-and-blast in a situation that we call “narrow reef”.

What that really means, is that the reef is about as high as your kitchen table and you’ve got to get under there and you have to work in difficult circumstances.

This is what we’ve been used to, but all of a sudden you had mines which had orebodies as tall as a double-decker bus, like at South Deep gold mine.

Also, now, with the Royal Bafokeng at Styldrift, they’ve got these tall orebodies. So, they can bring big equipment down there and they can drill with big machines and they can mine in a different way, which should be high-volume, but the big problem is the skills.

You find that these skills are so short of these big mechanised mining operations that the operators can move from mine to mine so fast, because they’re in such demand.

So, this is a big thing because it’s a whole difference and what is happening now is that South Africa is very short of these skills and in the mines that are blessed with these big orebodies, they are struggling to actually make sure that they can come above expectation.

We saw that at Styldrift – they were saying that they’re below expectation and that they have found that South Deep gold mine (which is a very rich gold mine), they are not showing the big riches because of the difficulty in getting skills and knowing how to mine in a mechanical way, which should be high volume but it’s not in South Africa.