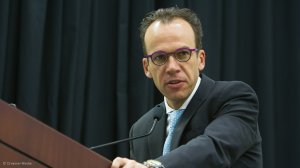 Some of West Africa’s major economies are going to face “significant headwinds” in the time ahead, says Deloitte emerging markets and Africa MD Dr Martyn Davies.

“There is some real economic pain coming.”

Looking back to 2013, Nigeria was ratcheting up double-digit growth in new-vehicle sales, with a 20% year-on-year increase and the market nudging at the 50 000-unit a year mark.

Fifty-thousand-units a year may not seem like much, but given a few years of compound growth, Nigeria could have presented an exciting new-vehicle market, says Davies.

However, then came July 2014, and the oil price collapsed from roughly $125 a barrel to $27 a barrel – much the same level as the current price.

“Within the space of a year, new-car sales in Nigeria declined from roughly 50 000 units a year to roughly 5 000 units,” notes Davies.

“So, the keypoint here, as an historical example, is that the oil price decimated the new-car market six years ago.”

Davies says he expects much the same to happen, as there has been a lack of structural reform in oil-dependent economics, such as Angola and Nigeria, over the last six years.

“Nigeria remains a price-taking economy and, above all, consumer confidence in the market is dependent on the oil price.

“There is only one show in town in West Africa and that is oil. What is happening now is very bad news for the region.

“It is going to be difficult to grow a new-car industry when the economy is non-diversified, oil-dependent and consumers are under significant pressure.”

Davies is more optimistic – “subdued optimism would be the word” – about Ghana.

“They are doing all the right things. It’s impressive to see what the Ghana government is doing about setting the right policies and protective mechanisms in place to court global OEMs [original equipment manufacturers, or car makers], to spur on industrialisation.”

Previous policies such as ‘one village, one factory’ did not deliver huge success, but luring European and Japanese OEMs to set up factories in Ghana “may just move the needle”, says Davies.

The fact that these countries do not have oil, has acted as a tailwind for growth.

“Roughly about a quarter of its import bill, similar to South Africa, is oil. Low oil prices are deflationary and encourage car use.

“This will stimulate growth in the new-vehicle market in Kenya – corona virus aside. We don’t know yet how that will play out.”

Davies believes the Covid-19 pandemic will create a lack of consumers in East Africa with sufficient expendable income to buy a car. A second impact will be governments’ response to the virus, which will typically play out as a shutdown to curb the spread of disease, which would act as a shock to the economy.

The third impact will be the loss of life.

Davies says there has already been a significant drop in the number of used vehicles arriving for sale in East Africa.

“This talks to a major drop in consumer spend and confidence, and this is not a supply-side issue from Asia, it is a demand-side issue in East Africa.”

Supply-side constraints will play more of a role in Morocco and South Africa, where vehicles are built for the global export markets, with a large number of parts sourced from abroad.

“Combined with Covid-19 and government shutdowns, this will cause disruptions in supply chains.”

In South Africa the effect of Covid-19 will be profound, says Davies.

“We are seeing a shutdown of the auto industry. So, 7% of our gross domestic product is literally shutting down. This is unprecedented.

“The impact will be severe. Vehicles are our single most valuable export, and the auto industry employs a significant number of people.

“We are seeing the demand side in our major export markets – Germany, the UK – drying up.

“I don’t know what the effect will be in numbers. How long will it take for the demand side to come back up? Who in the world is going to buy a new car in May, June? That is the trillion-dollar question.”