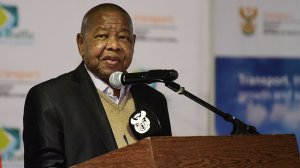 Government is not scrapping e-tolls and the issue of payment will be settled at a national level, Transport Minister Blade Nzimande has told members of Parliament.

The minister was answering questions in Parliament on Wednesday. Democratic Alliance MP Manny de Freitas asked the minister if any decision had been taken on the future of e-tolls.

"Government has not taken a decision to scrap e-tolls. Government is committed to implementing a road infrastructure in line with the objectives of the NDP (National Development Plan)," Nzimande said.

It's e-tolls or fuel levies

Apart from concessions which have introduced to alleviate the pressure on the poor, Nzimande said government was continuing to engage with Gauteng users.

He stressed that non-compliance with the payment system would lead to the deterioration of road networks. Government is aware of those objecting to pay and have heard proposals to rather increase fuel levies in an effort to pay the debt of the construction, he said.

Nzimande said government would continue engage with stakeholders until an amicable solution was found to collect funding for the infrastructure. "It is not a flawed system, the problem is less people are paying that are supposed to be paying," he said.

But de Freitas wanted the minister to clarify if there was a difference in opinion on e-tolls among members of the African National Congress (ANC), as last week Gauteng Premier David Makhura made statements that implied government might scrap e-tolls.

News24 quoted Makhura as saying: "Let there be no confusion, they are not part of the future of this province. We will have to work out how to pay for the roads, but not through the e-tolls."

To this, Nzimande replied that the ANC members do not shy away from debates. As for resolving the payment of the roads, he said: "This matter started as a Gauteng issue, but is now a national issue and must be resolved at that level."

He said the president tasked him to engage with stakeholders and to finalise the matter on payments as soon as possible.

He said he would engage with the Gauteng Premier and other relevant stakeholders such as the SA National Roads Agency. Government cannot make decisions on what should happen on its own, without engaging with those who have interest in the system, he said.

Earlier on Wednesday, the African News Agency reported that Makhura had reiterated his stance on e-tolls, saying motorists were overtaxed.