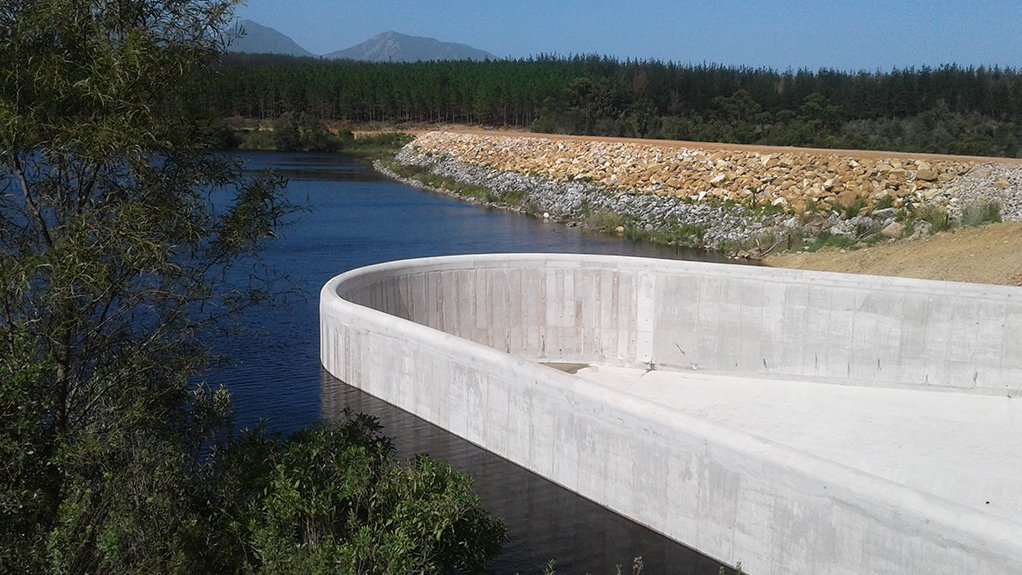 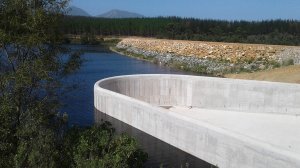 The company was tasked to raise the Garden Route dam – the main supply for water-scarce George – in May last year and went about devising a novel solution for the dam owing to unique technical constraints.

The ‘duckbill’ spillway was developed, not only allowed for the dam’s existing storage capacity to be increased by 25%, but also to significantly increase the discharge capacity of the spillway so as to boost the dam’s safety by preventing overtopping.

He says the main aim was to increase the overflow length such that the spillway or weir can pass more flow for a given overflow depth. “This allows for construction of very long spillways, typically four to five times longer than a linear spillway, in a limited area.”

The existing Garden Route dam spillway was only 25 m wide. However, the non-linear spillway extended this distance to 80 m by curving the spillway in the upstream direction.

Raising the dam’s water level was originally envisioned to be limited to increasing the overflow sill of the spillway or installing some form of fusegate system on the spillway.

These options were subjected to technical feasibility studies and an environmental impact assessment. The various spillway gate options appeared attractive from a cost-perspective, but undesirable when considering long-term maintenance.

Further, reevaluation of the dam’s flood hydrology, following large flood events experienced in the recent past, resulted in flood peaks significantly higher than the original dam and the proposed gate options were designed for.

The updated hydrology required that the crest of the embankment also had to be raised to ensure its safety. A new spillway concept, with a significantly higher capacity than the previous alternatives, was devised to be able to pass the flood peaks with as low a head as possible to minimise how much the embankment would need to be raised by.

The main dam wall was raised 1.76 m by placing new earthfill on top of the existing embankment. This task had to be achieved in confined spaces, atop high slopes, mostly using available material of suitable quality from the dam basin, and some imported from commercial sources.

The construction period was seven months, from May 13 to December 12, last year. However, the various planning stages for the project date back over a decade, with the idea of raising the dam first being investigated as far back as 2004.

The main client and dam owner is the George local municipality, with project funding from the Regional Bulk Infrastructure Grant.

“This will add much-needed drought resilience to the water-supply system. Expanding an existing water-supply resource is also preferable to the development of new sites, as it limits the extent of the environmental impact to an already impacted site,” Denys concludes.