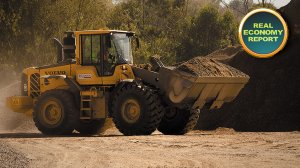 What will the EVO 703 be doing at the Raumix Quarry?

Heinrich Schulenburg: This is essentially the launch of the new EVO series, it’s basically an upgrade to the old machines that we used to supply therefore we chose a quarry that was willing to have a look at the machine also for their application, look for them to maybe take the machine on a trial, so at this stage it is the launch itself. It is not intended to stay here unless there is deals coming from it in the future.

Victor Moolman: What are some of the safety features of the EVO703?

Heinrich Schulenburg: All the standard safety features are there. It has got safety stops all around it but what is quite nice is that in terms of accessibility, everywhere where you need to be, if it is on top of the machine it is safeguarded by rails. I think that one upgrade that is really significant and stands out is that in the old machines you had manual controls on the machine itself. If you wanted to open up the conveyor belts and so forth you had to stand by the machine and operate it via manual controls, today everything is remote controlled, it could either be a completely separate remote control or on a long lead. What that gives you is that you can open up all of the conveyor belting, all three of them, and you can stand from a position where you can actually and ensure the safety of everybody coming close to the machine.

Victor Moolman: How will maintenance for the machines be done?

Heinrich Schulenburg: Again accessibility has been uppermost in the designer’s mind, if you look at the machine itself you will see quite a lot of access doors and those doors gives you access to most of the conveyor belting that is enclosed as well as the engine compartment. As well as any other features that needs to be accessible, be it hydraulic components, electrical, you can have access to it. Some of, which is a combined safety feature, is of course the machine is possible to lift and lower the machine. So what you can do it you can essentially be on a horizontal area at all stages. Your top deck of the screen, it’s a triple deck screen, the top deck can basically be raised to give you accessibility to the screens inside, they are easily removable which eases maintenance tremendously and from there onwards it is the same features as on the old machine, but all in all it is much about the accessibility and the ease of maintenance that has really improved on this machine.

Victor Moolman: Why was this machine chosen as the screening machine for the willows quarry?

Heinrich Schulenburg: The EVO range is the new launch we have upgraded in many aspects the old range and therefore it is what we believe is a good machine for contractor application but also for a quarry application. So therefore rather than launching at a quarry site, or rather at a contractor site, which is very specific usually a quarry makes a lot of sense. You have the possibility of producing four products with the screen being a three deck screen and giving you four products in the end, so it makes a lot of sense in terms or your aggregate sizes, depending on the sizes of your mesh you can obviously then changes them and get out the required product or aggregate size that is typically from a quarry, be it 19 mm, 7 mm or any of the other sizes you can put new screens in place and get the desired aggregate sizes.

Victor Moolman: That was Wirtgen South Africa MD Heinrich Schulenburg talking at the the Raumix – Willows Quarry in Pretoria for the launch of the new Kleemann Mobiscreen MS703 EVO, I’m Victor Moolman reporting for Creamer Media.