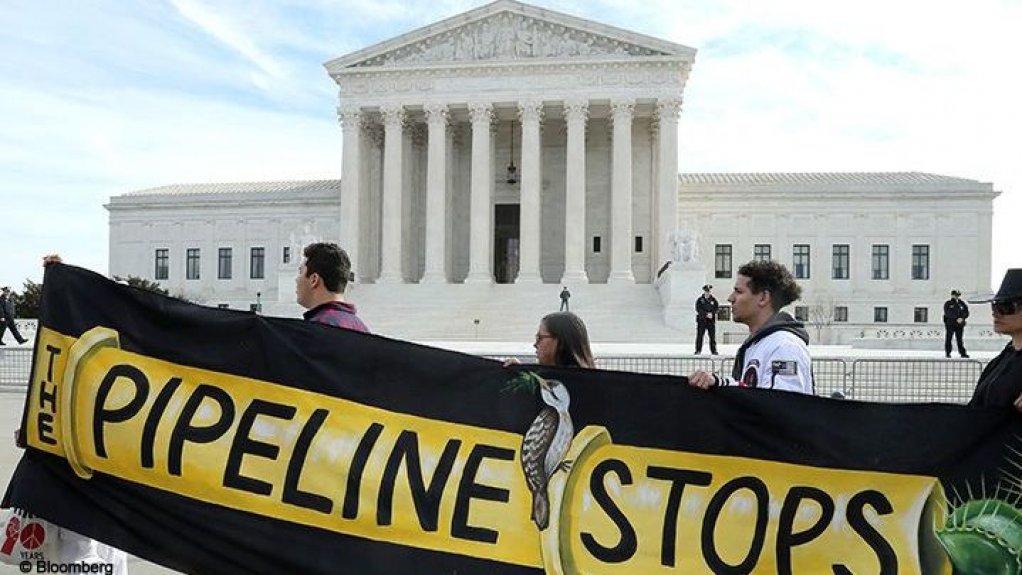 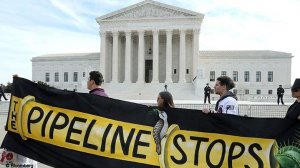 Demonstrators protest against the Atlantic Coast pipeline in front of the US Supreme Court in Washington, D.C.

Even the cleanest fossil fuel is losing its appeal to rich nations.

Just a few years ago, natural gas was hailed as vital for the transition toward an economy that runs on renewable energy. But sentiment is changing and the fuel is going the same way as coal, its dirtier sibling shunned by governments, utilities and investors.

The cancellation of the giant Atlantic Coast pipeline in the US and Ireland’s decision to scrap backing for an import terminal this summer are the latest signs that gas is falling out of favor with everyone from regulators to asset managers.

As countries intensify efforts to meet climate obligations, the fuel used for heating, cooking and power production is poised to lose out to solar, wind and private and public energy efficiency measures.

While natural gas only emits about half the carbon dioxide of coal, flaring and methane leaks have tarnished its reputation across the globe, according to Nick Stansbury, head of commodity research at Legal & General Investment Management in London. Many investors are also shying away to instead allocate funds to projects aligned with objectives of the Paris Agreement, he said.

“Gas companies have underestimated that the public opinion is changing rapidly,” said Stansbury. “Coronavirus lockdowns have had a role in that change, as investors are also stepping back and rethinking how things should be done.”

More than 1 200 institutions managing over $14-trillion in assets have committed to divest from fossil fuels, up from 181 managing $50-billion five years ago, according to a report from Fossil Free, an international environmental movement.

In the US, environmental opposition helped boost the costs for the Atlantic Coast pipeline to almost double to $8-billion. This year, about $10-billion of gas pipeline projects in the US got scrapped — even as gas enjoys political support from President Donald Trump’s administration.

European politicians are now debating whether to pursue the giant Nord Stream 2 pipeline from Russia to Germany -- not for environmental reasons but thorny geopolitical ones. That debate also raises the question of whether the pipeline would be going ahead anyway if so many billions hadn’t already been invested.

While in the rich world activists and investors are using their successful anti-coal playbook against gas, it's a different picture in the developing world.

Surging economies and urbanization is driving demand for both coal and natural gas. The biggest energy companies are spending billions on gas exploration and infrastructure as new markets open up.

“We will have a stronger growth in liquefied natural gas than in any aspect of the energy system,” Royal Dutch Shell’s CEO Ben van Beurden told reporters on July 30.

The increase will be helped by a plunge in prices after the worst glut the world has ever seen. Nations from Vietnam to Brazil plan to use the fuel to feed power hungry citizens and wean themselves off coal.

Vietnam’s shift to gas and renewables has been the most drastic in Southeast Asia, said Daine Loh, an analyst at Fitch Solutions. Roughly 26 GW of gas-fired power projects are planned by 2029, according to Fitch. That’s enough to meet 8% of the nation’s current power demand.

Total SA’s Mozambique LNG project has completed as much as $16-billion in funding in the biggest foreign direct investment in the continent yet. Brazil’s economy minister Paulo Guedes said that “a shock of cheap energy” is essential after this year breaking up a monopoly that will increase demand from factories and in transportation.

Demand will rise in Asia, Africa and Middle East over the next five years, while remaining stable in Europe, Eurasia and North America, according to the International Energy Agency.

Back in Europe, governments embarking on post Covid-19 recovery paths are even more focused on greening their economies. European leaders approved the most ambitious climate change plan to date, with more than 500-billion euros to be poured into green projects.

That’s bad news for projects like the Shannon LNG import terminal in Ireland, developed by US-based New Fortress Energy. The nation’s new coalition government on June 30 decided to withdraw it from the Projects of Common Interest list in 2021 that sets out which projects should receive incentives from the European Union.

The facility would be built on land once owned by the grandmother of computer programmer John McElligott. He has been fighting for the project for 14 years. “Ireland’s decision to not support Shannon is massive,” he said.

While Fortress hasn’t given up on its plans, the list of white elephants is growing.

A judge last year decided that an LNG terminal in Gothenburg on Sweden’s west coast shouldn’t be connected to the grid. Construction on a pipeline between France and Spain was abandoned after regulators on both sides of the border used vetoes to stop it.

The backlash against gas is even burgeoning in Australia, one of the world’s top LNG exporters. While activists in the country have traditionally opposed resource developments mainly because of local ecological impacts, resistance to new gas projects worth more than A$50-billion is increasingly focused on how they’re incompatible with the country’s climate commitments under the Paris accord.

Nicholas DeIuliis, CEO at CNX Resources, a gas producer in the heart of the American shale gas boom in Appalachia sums it up: “The intensity and the urgency has shifted for those in opposition to natural gas.”