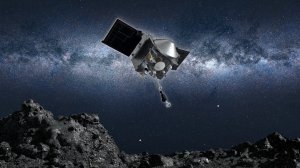 The US National Aeronautics and Space Agency (Nasa) has announced that its OSIRIS-REx spaceprobe has quite literally touched an asteroid. OSIRIS-REx is an acronym for Origins, Spectral Interpretation, Resource Identification, Security, Regolith Explorer. Its mission is to collect dust and pebbles from the surface of an asteroid and then return the sample to Earth in 2023.

The target asteroid is called Bennu, chosen because it is an ancient but well-preserved body, offering scientists information about the early Solar System, billions of years ago, when it was still forming. Bennu is currently 321-million kilometres from Earth. OSIRIS-REx, launched in September 2016, has been orbiting the asteroid since December 2018.

On Tuesday, OSIRIS-REx made a ‘touch-and-go’ pass of Bennu, touching the surface of the asteroid with an extended robotic sample-collection arm. If a large enough sample was collected, the spacecraft will be commanded to stow the sample and then to return to Earth. If the sample proves to be inadequate, another touch-and-go will be made in January.

“This amazing first for Nasa demonstrates how an incredible team from across the country came together and persevered through incredible challenges  to expand the boundaries of knowledge,” highlighted Nasa administrator Jim Bridenstine. “Our industry, academic and international partners have made it possible to hold a piece of the most ancient solar system in our hands.”

The spacecraft carried out the touch-and-go manoeuvre entirely autonomously. Its robotic arm, formally designated the ‘Touch-And-Go Sample Acquisition Mechanism’ (TAGSAM), blasted the asteroid’s surface with a burst of nitrogen gas, to dislodge dust and pebbles, some of which should have been captured by the TAGSAM’s sample collection head. Telemetry has confirmed that all aspects of the mission were successfully executed.

“This was an incredible feat – and today we’ve advanced both science and engineering and our prospects for future missions to study these mysterious ancient storytellers of the solar system,” stressed Nasa associate administrator (Science Mission Directorate) Thomas Zurbuchen. “A piece of primordial rock that has witnessed our solar system’s entire history may now be ready to come home for generations of scientific discovery, and we can’t wait to see what comes next.”

The only question is: was a big enough sample collected? The objective is to collect a sample of at least 60 g. There is no single, simple way to estimate the size of the sample obtained, so it will take scientists about a week to determine if enough material has been collected. The first indication will be provided by before-and-after imagery of the target site, which will show how much of its surface was disturbed by the burst of gas. The greater the disturbance, the more likely a sizeable sample was obtained. Then the TAGSAM head will be photographed by a dedicated camera; the amount of dust on the head will be an indirect indicator of the amount collected. Further, if light conditions permit, attempts will be made to photograph the inside of the head, to image the actual sample. And then the spacecraft’s ‘moment of inertia’ will be measured. To do this, the TAGSAM will be extended and the spacecraft rotated slowly along an axis perpendicular to the arm. This manoeuvre was carried out before the touch-and-go, to give a basis for comparison. The differences in the pre-touch and post-touch moments of inertia will allow engineers to measure the mass of the sample within the TAGSAM collection head.

“We will use the combination of data from TAG [touch-and-go] and the post-TAG images and mass measurement to assess our confidence that we have collected at least 60 grams of sample,” explained Nasa Goddard Space Flight Centre OSIRIS-REx project manager Rich Burns. “If our confidence is high, we’ll make the decision to stow the sample on October 30.”

Stowing the sample will involve the TAGSAM putting its collector head into the Sample Return Capsule (SRC), which is in the body of the spacecraft. The arm, no longer required, will then retract into the spacecraft, and the SRC will close. OSIRIS-REx will only leave Bennu in March next year, because that will be when the asteroid is best aligned with Earth for the most fuel-efficient return voyage. When it reaches Earth, in September 2024, the spacecraft will eject the SRC which will then parachute down into the west desert of the US state of Utah, where it will be collected.