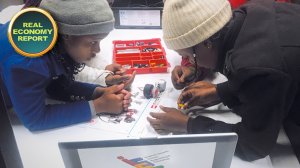 The Inspired towards Science, Engineering and Technology, or I-Set, project, sponsored by petrochemicals company Sasol and facilitated by the University of South Africa, uses mobile laboratories and robotics kits to teach science to school children. Schalk Burger has the story.

The nine mobile science laboratories, which are minibuses that transport physical and chemical science and robotics kits, allow children in remote and underprivileged schools to learn about science through practice, tests and play.

The project, which is in its tenth year, aims to equip educators and inspire and learners to pursue careers in science, technology, engineering and mathematics (or STEM) fields.

The mobile laboratories use Lego Education EV3 Mindstorm robots in the kits. The children build a basic robot, such as a wheeled robot, and then program it. Once the robot can move around, the children change and reprogram it and learn about logic and mechatronics in the process.

The project uses technology to reach out to rural communities and improve delivery of education in schools. Robotics makes a significant impression and impact on the children exposed to it and the mobile laboratories aim to make this possible in many communities.

The volunteer facilitators, who are typically undergraduate science students at Unisa, communicate the scientific principles to the children in their mother languages, which helps to mitigate language barriers and inspires children who work with the students to pursue careers in STEM fields, says I-SET project leader Dr Patricia Gouws.

Gouws gives insight into the vision of I-SET and the impact of the mobile laboratories and how children react to building and working with robots.

And, Aveng reports strong market interest in most of its noncore assets

Aveng has turned its attention to the disposal of several noncore businesses, including its well-known construction business, Grinaker-LTA.