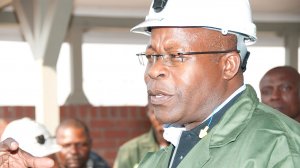 JOHANNESBURG (miningweekly.com) – In the three months to June 30, platinum mining major Lonmin recorded lower unit costs and higher net cash on improved production and rising sales – but suffered two fatalities in a quarter when the overall injury level was on a firmly downward trajectory.

On sustaining the company’s financial turnaround, CEO Ben Magara said: “We continue to find levers to pull, even in the lower-for-longer platinum price environment.”

Having assumed direct hands-on COO control of all operations in addition to his chief executive role, Magara expressed “great regret” in having to report two fatalities in a period when the 12-month rolling safety lost-time injury frequency rate improved by 2% quarter-on-quarter.

The London- and Johannesburg-listed primary platinum producer and refiner generated 84% of its tonnage from its Generation 2 shafts, where output was 9% higher at 2.2-million tonnes.

While the stronger rand cut 3% off the year-on-year basket price to R11 506 a platinum group metal (PGM) ounce, the improved mining performance lowered unit costs by 4.7% to R11 278/PGM ounce on a six element basis.

Lonmin is proving that it is still able to deliver and aims to be “at least cash neutral”, Magara said in a release to Creamer Media’s Mining Weekly Online.

The deaths of both locomotive operator Simon Sibitane and rail maintenance team leader Mangi Bunga occurred at Shaft 4B, causing its quarterly production to plummet by 26.5%.

“The five fatalities experienced during the first nine months are unacceptable. We'll be holding a safety workshop with stakeholders this month as we continue to work with all stakeholders to identify and implement sustainable remedies,” said Magara.

The Marikana mining operations, including Pandora, produced 2.7-million tonnes during the three months to June 30, an increase of 3.8% on the prior-year period.

In line with the group’s rationalisation of high-cost areas, production from the Generation 1 Hossy, Newman, W1, E1, E2, E3 and Pandora shafts of 431 000 t, was 18.1% lower than the prior-year period.

During his days as COO of New Denmark Colliery, Magara succeeded in propelling the then struggling coal operation on to a positive new trajectory that doubled its output.

A source of encouragement to him is that production is turning nicely upwards, buoyed by encouraging new cooperation between his company, the once-hostile Association of Mineworkers and Construction Union and the principal inspectorate of the Department of Mineral Resources, and platinum assets that he regards as the biggest and the best on the western limb of the Bushveld Complex.