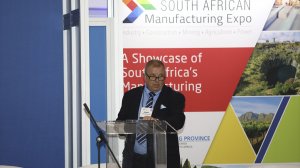 Determined to broaden the inclusion of local manufacturers in local and international supply chains, the South African Capital Equipment Export Council (Saceec) has partnered with Specialised Exhibitions Montgomery to launch the Local Southern African Manufacturing Expo (LME), which has, so far, received over 3 700 pre-registrations.

The exhibition, which will be held at the Johannesburg Expo Centre from May 21 to 23, is endorsed by Gauteng Premier David Makhura and supported by the Association of Representatives for the Electronics Industry, as well as the Department of Trade and Industry.

Set to showcase South Africa’s manufacturing capabilities across a range of industry sectors, Saceec CEO Eric Bruggeman tells Engineering News Online that the significance of the inaugural expo will be found in being able to provide local manufacturers with an opportunity to demonstrate their export potential. It also intends to facilitate collaboration between the private and public sectors, while promoting and showcasing local manufacturing across all industry sectors.

The biennial event will be held in alternate years to the Electra Mining Africa expo.

The organisers expect between 4 000 and 5 000 visitors to attend the event next week.

The manufacturing sector offers the potential to significantly accelerate South Africa’s economic growth and development. With a specific focus on Gauteng, the LME will showcase leading local industries to thousands of potential national and international investors.

Cutting across a range of sectors, the exhibition’s objective is to demonstrate how local manufacturing is key to unlocking vast economic empowerment, growth, development, job creation, investment and export opportunities.

About 130 exhibitors are expected to attend the LME.

In highlighting the local manufacturing industry’s significance, Bruggeman tells Engineering News Online that if South Africa had to take 50% of its imports and redirect the funds locally, about 13-million jobs could be created, which could ultimately resolve the country’s unemployment crisis and have a significant impact on boosting the local economy.

“For every R1-million spent locally, on average, one person is employed at an original-equipment manufacturer and could have a knock-on effect on employing up to another ten people in related industries, such as painting, tooling or transportation,” he says.

South Africa imports about $83.2-billion worth of products every year.

By growing the local manufacturing sector, the economy will receive a boost, which will, in turn, increase manufacturing orders, creating countless more jobs and skills development and training opportunities in a country with an official unemployment rate of 27.6%.

Furthermore, it bears emphasizing that if the number of people who have given up on seeking employment opportunities is included, the unofficial employment rate is much higher.

The LME will also feature the Saceec Exporter of the Year Award, which sets out to acknowledge the achievements of its 16 finalists.

Together, these 16 finalists exported R4.4-billion worth of goods in 2018, R1.6-billion of which was exported into the rest of Africa.

Categories at the Export Awards are:

The awards, Bruggeman points out, are set to become a yearly event.