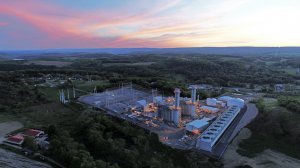 The introduction of liquefied natural gas (LNG) in South Africa will be a critical first step for the development of the gas-to-power capacity that is expected to complement the country’s ambitious renewable-energy roll-out, General Electric’s Commercial Growth Director for GE Gas Power, Sub-Saharan Africa, Michael Konadu, argues.

He notes that offshore supply to PetroSA has already fallen dramatically, while imports from the Pande-Temane fields in southern Mozambique are expected to taper during the current decade.

In addition, while recent domestic offshore discoveries, such as Brulpadda and Luiperd, and onshore shale prospects appear promising, they are yet to be commercialised.

Likewise, sourcing of gas from the Rovuma basin, in northern Mozambique, remains challenging, owing not only to security concerns but also the absence of logistic infrastructure and the high capital cost of potentially building a 2 600-km gas pipeline to connect the reserves to markets in Gauteng, Mpumalanga and KwaZulu-Natal.

“These challenges limit gas supply to South Africa,” Konadu says, adding that questions, therefore, continue to be asked about the source of gas needed to meet the Integrated Resource Plan’s (IRP’s) 3 000 MW allocation for gas power capacity by 2030.

In several other countries without adequate commercial gas reserves, LNG has become a fuel of choice and GE is convinced that LNG represents the quickest way to bring in the gas South Africa requires to meet the objectives outlined in both the IRP and the Gas Master Plan.

A further supportive factor is the fact that the LNG market has shifted in recent years from being a typical long-term seller’s market to a buyer’s market, where spot and interruptible contracts are increasingly traded.

“Global LNG trading is projected to double by 2040, with 130-million tonnes per annum of regasification capacity under construction adding about 15% to global capacity when operational.”

GE is, therefore, convinced that the timing is right for South Africa to implement its gas-to-power programme to take advantage of the current favourable LNG market dynamics.

However, GE’s Gas Power chief commercial officer for sub-Saharan Africa, Nosizwe Dlengezele, says that clarity on Transnet’s role, Eskom’s liquidity issues and the country’s regulatory landscape still need to be addressed to fully open the way for both LNG importation and the implementation of the gas-to-power programme.

GE is of the view that import infrastructure development will be quicker to implement under an integrated model rather than through one that decouples gas supply from the power programme.

“A bundled approach allows the gas-to-power project consortium to manage project-on-project risk, including the LNG terminal and power plant infrastructure.

“The consortium also bears the liabilities for failure to dispatch power either because of gas supply operations or power plant operations, hence ensuring all requirements of lenders are met to facilitate project implementation,” Dlengezele explains.

An integrated approach, with government taking an equity stake through Transnet and/or the Central Energy Fund, will deliver competitive LNG molecules, she avers.

For evidence, GE points to the 1.5 GW Sergipe project, an integrated LNG-to-Power project in Brazil.

The project was financed by a Goldman Sachs $925-million bond, backed by the Swiss Export Credit Agency, with the Inter-American Investment Corporation and the International Finance Corporation providing the debt facility, which comprises $288-million and $200-million respectively.

“The project provides cleaner, more reliable large-scale power for growing communities and helping facilitate Brazil’s transition to lower-carbon energy and GE believes the Sergipe approach can be replicated in South Africa under the IRP.”

Dlengezele also highlights that, with a supportive policy framework in place, the benefits of the importation of LNG will not be limited to the electricity sector.

“For instance, logistics companies switching from diesel to LNG for their long-haul trucks will see an estimated cost saving of between 15% and 25%.”