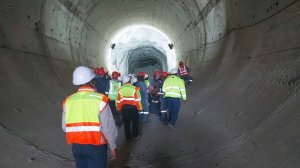 This marked the completion of the 1 870 m of tunnel excavation that the authority has been working on since June last year.

The Polihali diversion tunnels, which are 7 m and 9 m in diameter, respectively, and both almost a kilometre long, were excavated by drill and blast method.

The progress on the tunnels was achieved despite challenges around Covid-19, harsh weather conditions, flooding of the Senqu river in January and other social challenges.

Completed works on the contract include excavation of the portals and the in-situ reinforced concrete lining of the inside walls of the two tunnels for about 35 m from the entrance of both tunnels.

The remaining works include invert concrete lining for the overall lengths of the tunnels and some minor surface works.

The diversion tunnels will convey water that is diverted away from its natural path (the river) to ensure that, during construction of the Polihali dam, work can take place in a dry area, uninterrupted by the river flow.

As a result, the dam contractor will also have earlier access to the river section than normal.

The diversion tunnels construction contract was awarded in February 2019 and its completion is planned for the end of this year.

The LHWP Phase 2 builds on the successful completion of Phase 1 in 2003. It delivers water to the Gauteng region of South Africa and uses the water delivery system to generate electricity for Lesotho.

Simultaneously, it will increase the quantity of electricity generated at the Muela hydropower station from about 500 GWh/y to 800 GWh/y and is a further step in the process of securing an independent electricity source to meet Lesotho’s domestic requirements.