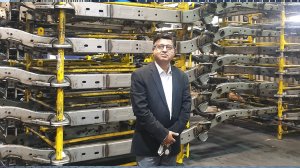 The KLT Group aims to diversify its business in South Africa following the completion of its large-volume contract with Ford South Africa later this year.

KLT’s contract with Ford for the local production of the chassis assembly for the current Ranger bakkie will come to an end in 2022, confirms KLT Group South Africa’s new CEO Ashok Thakur.

Ford is set to take production of the chassis on the new-generation Ranger pickup in-house.

If the name Thakur sounds familiar, it is because the new KLT boss is the former CEO of Mahindra South Africa.

KLT entered the South African market more than a decade ago, following a meeting of minds between Ford, KLT and the Department of Trade, Industry and Competition, which saw KLT set up shop in Hammanskraal in a greenfield development to supply the Silverton Ranger assembly line, explains Thakur.

“We are the only chassis manufacturer in South Africa,” he notes. “We start with steel coil and manufacture in-house all of the 200-plus components that go into a chassis. For all the variants there are 600-plus unique parts.

“We consider the stamping ability within KLT to be pretty unique, as it includes small to large presses. Also, we must have some of the largest stamping capacity in the country. Welding is completely robotic, utilising over 130 robots,” explains Thakur.

“We supply chassis for more than 19 variants in the Ranger line-up – left-hand and right-hand drive – and we have also exported chassis products to South America and Asia.

Thakur says KLT is actively looking at new opportunities in the automotive and other industries and is encouraged by the response so far.

“We are looking at speedily replacing Ford business with these new opportunities, thereby protecting the jobs and skills that we have created.

“This is why KLT reached out to me to take up the position as CEO, as someone with a business development orientation.”

In sowing the seeds of an initial diversification strategy, KLT in 2019 acquired the AVMY Steel Science pressing, welding, assembly and e-coating plant, in Brits, in the North West province, in an investment valued at roughly R30-million.

KLT operations at the AVMY plant supply auto components to Toyota, Mercedes-Benz South Africa (via a production partnership with Martinrea) and RG Brose.

“Then, however, Covid-19 hit us, and that diversification strategy did not progress,” says Thakur. “Production at all of the original equipment manufacturers (OEMs, or vehicle manufacturers) was also impacted for a while, and only came back at smaller volumes.”

Thakur says chassis production at KLT is currently operating in two shifts, as opposed to the three shifts prior to Covid-19.

Staff attrition was also a challenge for the local arm of the India-based group, with some skilled staff departing the company as it became known that Ford was to move chassis production in-house.

Now, however, KLT is again gearing up to secure new business in South Africa, notes Thakur.

“We had to create the right mindset internally and make sure we retained skills. We performed our annual preventative maintenance in December to ensure the plant performs optimally, and we are excited to pursue additional opportunities in the new year.”

Thakur says all of the local OEM operations are currently talking to KLT on various business proposals – including Ford.

“We are in different stages of working on different requests for proposals. Some are for existing vehicle platforms that require more local content, and some are for new platforms coming online in the next year or two.

“We are also looking to supply some large tier-one component suppliers with sub-assemblies.

“There is a big localisation push in the market, due to changes in government’s auto policy. Last year’s civil unrest in the country has also seen some businesses reconsider their position in South Africa,” says Thakur.

“The current long delays within the global supply chain, as well as very high freight rates, are also aiding the localisation drive, with efforts to replace parts coming from Thailand and China, for example.”

“If we have to acquire a business to gain market access, we’ll do so,” notes Thakur.

“At this point the business opportunities look quite exciting, and I believe KLT will secure new business in the next three to six months.”