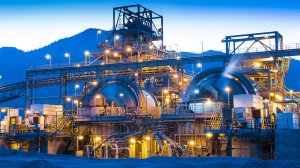 The one project is a Merensky reef expansion project at the Two Rivers platinum mine, in Mpumalanga, and the other the expansion of the production capacity of the Bimha Mupani projects at Zimplats, in Zimbabwe. (Also watch attached Creamer Media video.)

“They’re both shallow, mechanised, low-risk and fit into our strategic objectives very well,” Muller said at a media briefing covered by Mining Weekly.

The African Rainbow Minerals (ARM)-managed Two Rivers is a joint venture between ARM, at 51%, and Implats, at 49%. The operation is situated on the southern part of the eastern limb of the Bushveld Complex, some 35 km south-west of Burgersfort.

Taking questions after the Johannesburg Stock Exchange-listed company reported a stellar set of financial results that recorded 328% rocketing headline earnings of R14.5-billion, Muller described the funding for the projects as being “very feasible within the current remit of our financial performance”, and added that the company hoped to come to the market within the next few months with announcements on both projects.

“We do believe that we have the most attractive opportunities within our own company,” Muller emphasised.

Implats is guiding capex for the current financial year to the end of June at a low range to R5.8-billion to R6.2-billion for the full year.

For some time now the Zimplats smelter has been operating at 6.5-million tons capacity a year from four mines and three concentrator plants.

“So, the expansion of Zimplats comes with a need for further beneficiation capacity,” said Implats COO Gerhard Potgieter.

A ramp of the proposed new Bimha Mupani mine expansion, it would become the fifth mine and together with the Bimha mine, will be growing into a significant size of the production.

“So much so, that this proposed project will take it to 6.7-million tons, which means that only those two mines together will be able to produce the full capacity of Zimplats, leaving the other three older mines with some excess capacity for us as they ramp down.

“So, the first thing we have so do is to provide a fourth concentrator unit at the operation, so that we can concentrate those tons. Unfortunately, the smelter at Zimplats is at full capacity, which means that the first step from that would be those concentrates having to come to our Rustenburg operations and be treated here.

“Longer term, we’ve acknowledged the fact that we are constrained as far as our smelting capacity in Zimbabwe is concerned, and we are busy with studies for a further furnace and the sulphur abatement that goes with it. It’s quite a substantial capital investment to be made and we’ve started with the feasibility studies on that. It’s early days, but we’ve acknowledged the fact that we need  more capacity in Zimbabwe,” Potgieter said.