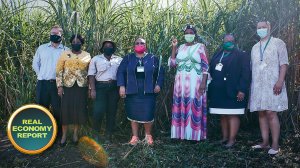 For the project, sugar giant Illovo Group’s South African subsidiary, Illovo Sugar South Africa, partnered with the National Treasury’s Jobs Fund in 2017 on a R126-million grant to plant 3 000 ha of sugarcane on communal land over three seasons in the KwaZulu-Natal area. Illovo Sugar MD Mamongae Mahlare outlines the project and its successes.