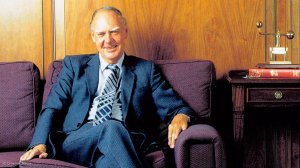 The much respected former CEO of Eskom, Ian McRae, died in the early hours of Sunday morning July 12, 2020. He was 90 years old.

Born in Germiston on September 24, 1929, Ian Campbell McRae started his career as an apprentice fitter and turner at Eskom. After qualifying he went on to obtain a degree in Mechanical Engineering.

He rose through the ranks at Eskom, primarily in power stations and engineering until he was appointed as Chief Executive in 1985.

At this most challenging time in South African history, McRae worked tirelessly to promote the benefits of electricity as a driver of social and economic development.

His vision of ‘electricity for all’ and the interconnected ‘Southern African grid’ became an inspiration for utilities across the globe as well as serving as a rallying call for many South Africans.

After retiring from Eskom in 1994 he was appointed as the Chief Executive tasked to establish the National Electricity Regulator.

McRae received many awards, the most notable being:

De Ruyter noted that McRae had presided over a major build programme that led to the development of many of the large power stations still operated by the utility.