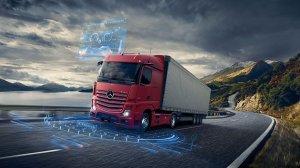 These include the absence of outside mirrors in favour of in-cab screens (mounted on the A-pillars) that are linked to outside cameras, and something called predictive power train control (PPC).

These innovations promise a saving in fuel of up to 5%, which can be a significant amount of money for any fleet operator.

“Approximately two years ago, we launched the fourth-generation Actros . . . and today we are extremely honoured to fulfil our promise to expediently introduce the latest technology on the range without further delay.”

In addition to a satellite-based positioning system, the system uses precise 3D digital road maps that contain exact data on topography, which means the truck knows the road and route profile ahead.

In practice this translates into the vehicle moving in an anticipatory manner, using, for example, predictive gear shifting, as it can ‘see’ the hill or descent ahead.

This allows the new Actros to save as much fuel as possible, while ensuring optimal driver support.

All the major routes in South Africa have already been mapped in the PPC portfolio and uploaded in advance of the introduction of the technology, says Gerber.

For the first time in a mass-produced truck, the MirrorCam replaces the conventional main and wide-angle mirror with an in-cab camera system, improving safety and maneuverability, says Gerber.

It also allows the driver to see what is going on around the truck at night without the need to get out of the vehicle, should the driver be at a truck stop, says Gerber.

The MirrorCam is compatible with 27 m interlinks, she adds.

The system can improve fuel efficiency by up to 1.3%, through improved aerodynamics.

Another feature is the newest version of active brake assist (ABA).

The system is now capable of carrying out emergency braking when encountering pedestrians crossing its path – approaching from the front or walking across.

If ABA 5 detects a risk of collision with a vehicle travelling ahead, a stationary obstacle or a moving pedestrian, the driver is alerted of the danger by a three-stage escalating warning system.

Benefitting directly from the innovations available in the new Actros is the new Arocs range, adds Gerber.

Initially introduced in 2019, the Arocs range is active in the distribution and construction sectors.

DTBSA assembles the Actros and Arocs ranges at its East London plant.

The Actros 5 won the global 2020 Truck of the Year award.