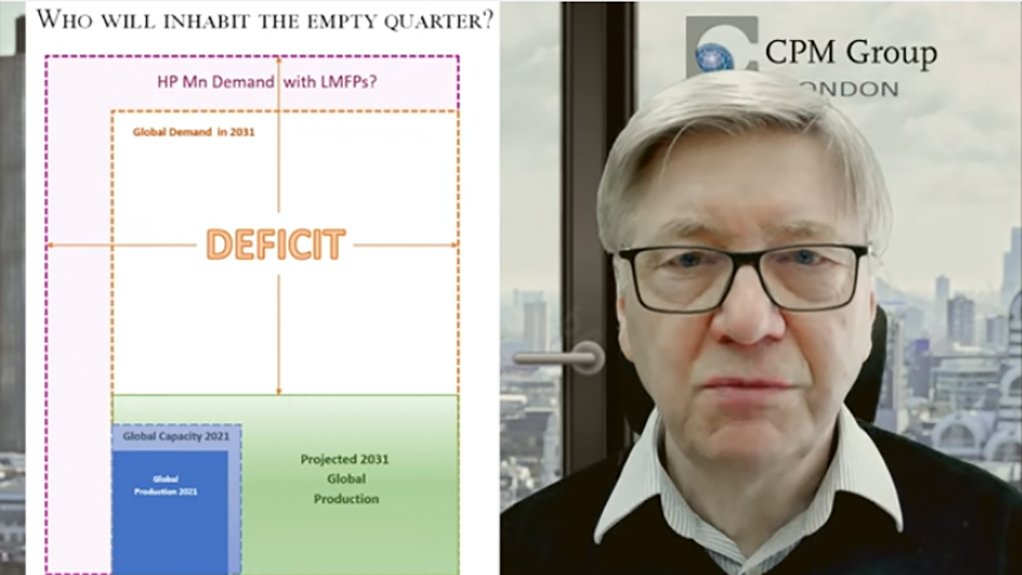 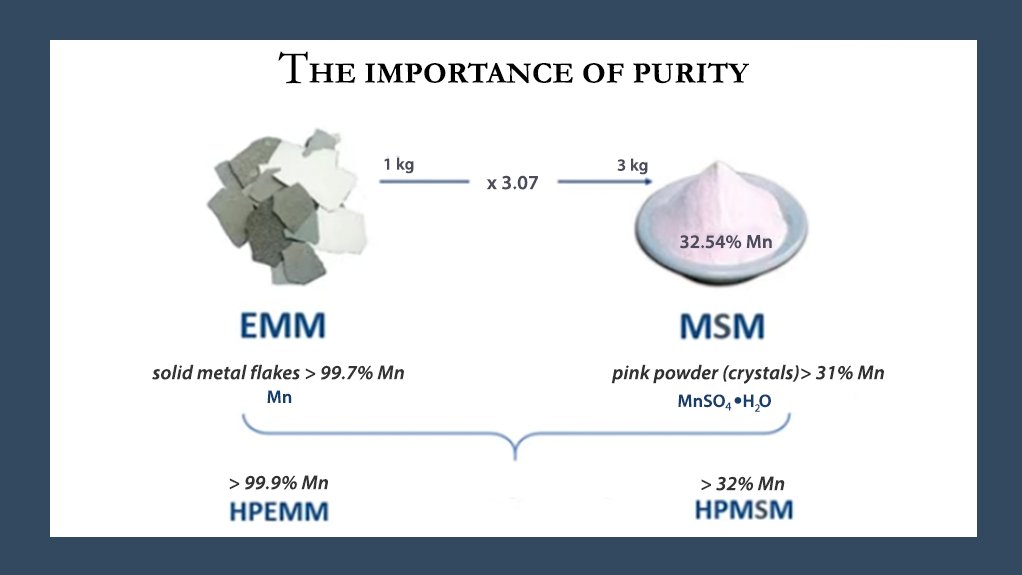 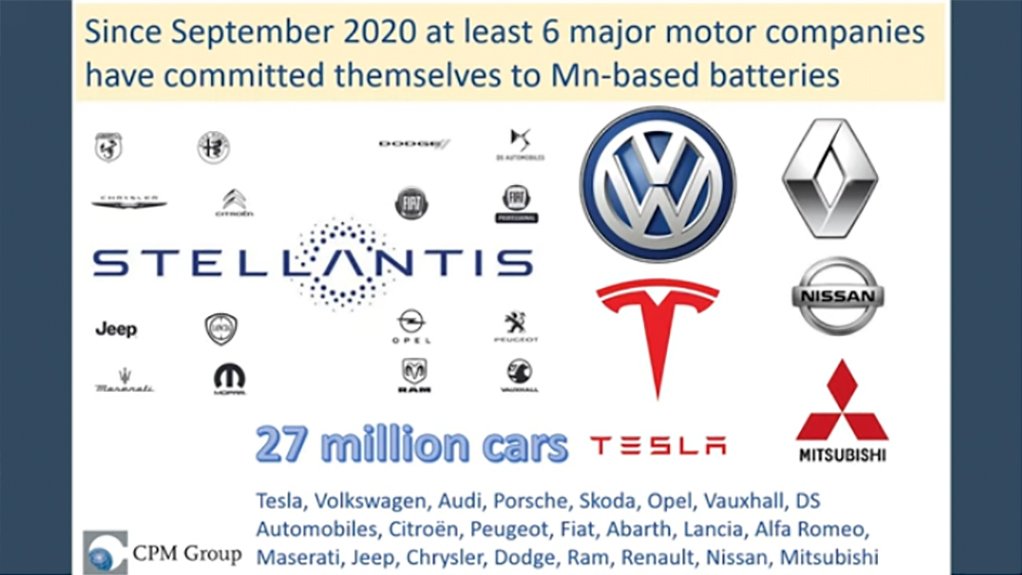 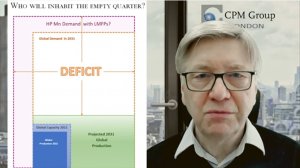 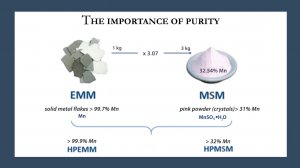 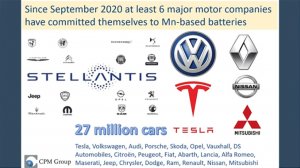 JOHANNESBURG (miningweekly.com) – The commitment of at least six major motor companies to manganese-based batteries for battery electric vehicles (BEVs) is elevating the demand outlook for high-purity manganese phenomenally, a Prospectors & Developers Association of Canada (PDAC) conference has been told.

The car companies that are basing their electrification strategy around manganese produce 27-million vehicles a year, and a significant factor is the weight of the manganese that will be needed, Zemek stated during the presentation covered by Mining Weekly on YouTube.

Eight-million BEVs are likely to be built in 2022 and a projected 150-million BEVs a year will be built by 2030, with some BEV battery packs weighing up to 500 kg and up to 100 kg of that being manganese, Zemek noted.

The presentation related the situation to the words of the song 'water, water everywhere but not a drop to drink' in that there is abundance of manganese ore availability but a huge looming shortage of high-purity processed manganese because of the lack of adequate processing capacity.

Manganese is mined in 15 countries and is the twelfth most common mineral in the earth’s crust, with South Africa’s long-standing manganese contribution being noted for its high quality and consistent output. South African manganese mining is concentrated in the manganese-rich Kalahari basin of the Northern Cape, which is believed to hold more than 70% of global manganese ore reserves.

At issue is not the outlook for the supply of raw manganese ore, but rather huge projected demand for high-purity manganese with an unmatched processing threshold.

Zemek emphasised that although manganese resources are big enough for the current 20-million tons a year of metal for the next 300 years, limited processing capacity is placing a concerning supply constraint outlook on high-purity manganese.

From an engineering viewpoint, cobalt, with all the necessary electrical and chemical properties, is an ideal battery metal, but reliance on a single country for 65% of it, along with its high and volatile price, have prompted battery engineers to use more manganese, which has similar physical properties.

More than 90% of the world's capacity to produce high-purity manganese is in China, with five projects at feasibility stage likely to deliver new production between now and 2030.

South Africa’s Manganese Metal Company, situated in Mbombela, is reportedly the world’s only non-China based producer of high-grade electrolytic manganese metal (EMM) and the world’s largest refinery of 99.9% (selenium-free) EMM, with 95% of production exported.

The three products have different markets, with EMM being most used in the steel and alloy industry along with new applications in the cathode of the batteries of BEVs. The main application for EMD remains in non-rechargeable primary alkaline batteries. MSM, in its high-purity variety, is used almost exclusively for lithium-ion batteries, and in its ordinary variety in agriculture as a cattle-feed supplement and as a fertiliser component.

In addition, moves are afoot to replace as much as half of the iron in lithium/iron/phosphate (LFP) batteries with manganese, which would lift manganese demand still further.

Ironically, the three main versions of high-purity manganese products currently take up less than 1% of the 20-million tons of manganese mined yearly, but projected growth is exponential.

The cathode powder is mixed with liquid and the slurry used to coat a plastic film, which serves as a cathode, with batteries commonly named after the metals in their cathodes.

The most typical battery for BEVs is nickel/manganese/cobalt (NMC) and other kinds include LFP and nickel/cobalt/aluminum (NCA).

The awareness level of the degree to which these battery types are used in mobile phones, laptops or cars is not high.

Currently, manganese-using NMC batteries account for about half of the lithium-ion batteries produced.

LFP batteries account for about 25% to 28% and NCA for the rest. There are also several smaller chemistries that account for the remaining part of the battery market.

In 2021, the average price of cobalt was 15 times more expensive than manganese and earlier this year it rose to 23 times higher in price than manganese.

Ninety per cent of the 20-million tons of metal mined yearly goes into ferroalloys, used in steel production, special alloys and aluminium alloys, with the remaining 9% to 10% going into specialised hydrometallurgically produced products, which are dissolved in sulphuric acid and the product generally extracted by electrolysis.