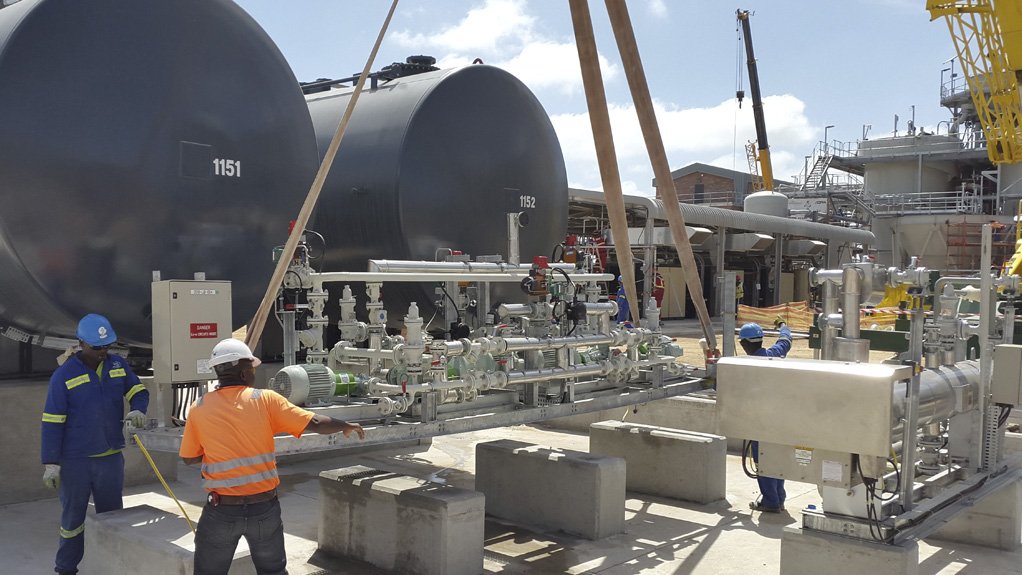 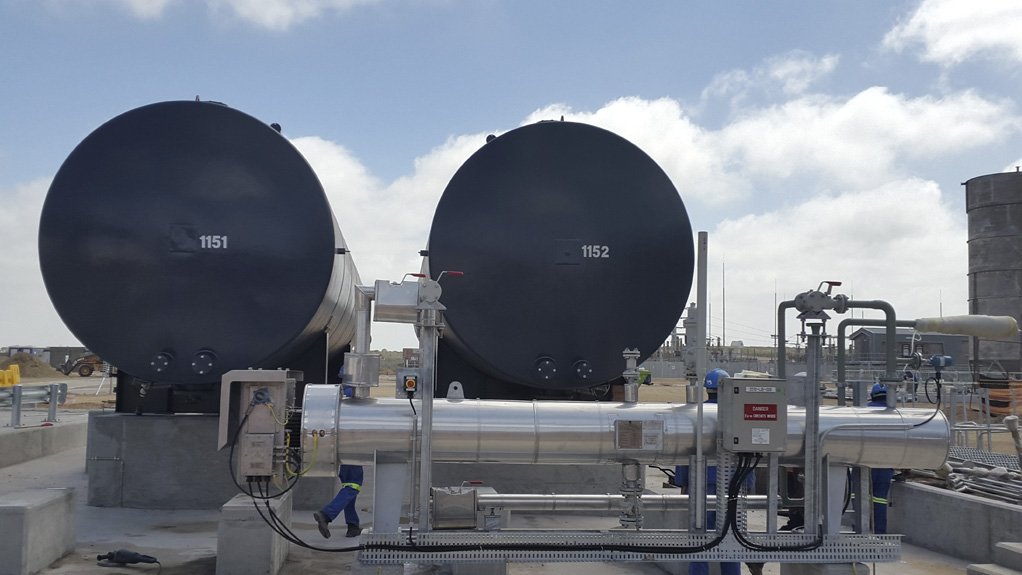 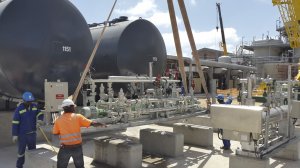 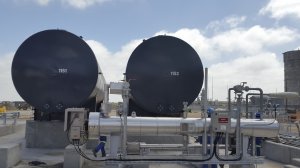 Energas’s scope for the project included the fabrication, inspection, testing, coating, preparation for transportation and delivery of the HFO facility to the Elandsfontein phosphate project site in the Western Cape, where the facility has been established.

DRA first contacted Energas in May last year. The contract for the HFO storage facility design – which included designs for the processing, mechanical, piping, electrical and instrumentation components of the facility – was awarded to Energas in June, with a contractual delivery date set for November 30 that same year.

Energas’s mandate inlcuded discharging HFO from the tanks using a dry-disconnect coupler. The HFO will be pumped into the storage tanks, with a separate pump skid pumping a portion of the HFO to a heater. The remaining HFO will be recirculated through the tanks to prevent oil build-up. If the oil in the tanks ever dropped in temperature, the control system would respond by recirculating the hot oil back into the tanks until the temperature reached appropriate levels.

The hot oil will be used to fuel the burners, which are used to dewater/dry the phosphate before it is conveyed to product handling. This is the last phase before it is loaded onto the trucks.

Energas delivered the completed skids to site, with all the equipment and piping on the skids preinstalled and tested at the fabricators. The team consisted of about 15 people that assisted in the fabrication of the structures and piping. The mechanical installation was handled by a team of just five people; three people were responsible for the electrical and instrumentation installation.

Breathing vents, also known as pressure-vacuum vents, were also installed on the tank to enable the tank to operate at atmospheric pressure.

Energas project engineer Marianne Lourens explains that breathing vents are always considered with fixed-volume tanks. “The tank holds a liquid that is transferred by either filling or emptying the tank. The movement of the liquid in and out of the tank will, respectively, decrease or increase the air volume above the liquid. This air volume is known as the vapour space.”

She notes that, when liquid is pumped into the tank, the vapour space decreases, so the gases compress and the tank pressure builds up. Thus, a breathing vent is required to allow the air to escape, thereby ensuring that the operating pressure of the tank is not exceeded.

Lourens illustrates the process of emptying the tank by comparing it to drinking from a plastic bottle: “If you keep your mouth over the opening, the volume decreases. The more liquid you drink, the higher the negative pressure, and eventually the bottle will contract. When you remove the nozzle from your mouth, air flow into the bottle is restored and the pressure in the bottle equalises.”

In the case of the tanks, the breathing vent is used to restrict thermal expansion of mediums, owing to temperature changes, she adds.

“A breathing vent was included to prevent the tank from rupturing or collapsing,” Lourens summarises.

“Energas’s commissioned work at the Elandsfontein phosphate project was delivered on time and within budget. The value of Energas’s contribution to the project is about R10-million,” she says.

The company was able to draw from its vast experience as it had to complete a similar project to this one, comprising a heater skid and heat exchanger for Sasol Oil’s HFO depot, in Pretoria West, earlier in the year.

Energas believes that it secured this phosphate project because of its ability to deliver the entire scope. Further, its access to experienced consultants and reputable suppliers was taken into consideration.

“The success of this project will definitely highlight our reputation for providing excellent service and on-time delivery, and more so since this is our first project for DRA Global. It also enabled us to gain more exposure to HFO applications and we would like to do more of these types of projects . . . ” Lourens says.

She notes that the main challenge of this project was the restricted timeline, as the long lead items had initially been scheduled to arrive in December last year; however, Energas managed to ship them by air instead of sea freight to reduce the delivery time.

Mining at the Elandsfontein site is expected to start later this year. Abut 1 100 people have been employed for the project’s construction phase, with almost 50% local employment, and more than 450 people will be employed as part of the Elandsfontein operational workforce.

South Africa imports about 60% of its fertiliser requirements, which makes access to phosphate vitally important to future food security in the country, according to fertiliser minerals miner Kropz, the majority shareholder, key funder and debt provider for the development of the Elandsfontein phosphate project.

Kropz is investing R1.35-billion in the development of the Elandsfontein project. It expects that upon completion, as a consequence of the combined rehabilitation mining process, the affected area will be returned to a functional ecological state that can be included as part of the Elandsfontein Nature Reserve. In association with Heritage Western Cape, the Elandsfontein Dune Fields have been declared a provincial heritage site.