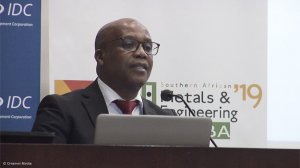 Public Enterprises Deputy Minister Phumulo Masualle on Friday said the Department of Public Enterprises (DPE) was looking to create “a sense of certainty” in the local steel and manufacturing industries by leveraging investments from State-owned entities (SOEs).

This, he told delegates at the Metals and Engineering Indaba, in Sandton, would be done through the creation of a demand plan for the SOEs, which would consider the investments that SOEs would be pursuing over the medium to long term.

“We are insisting on having five-year demand plans that will give us certainty to the procurement to be undertaken across these entities,” he said during his presentation, adding that localisation would become a set requirement in the plan.

Further, with regard to improving the effectiveness and efficiency across the SOEs, Masualle said there was “an ambitious programme” to ensure the transport of goods increasingly shifted from road to rail.

This, the Deputy Minister said would be done through “transforming the transport sector in a way that will ensure that there is connectivity to economic hubs”.

The private sector would also be given an opportunity to participate, he added.

Additionally, the department was also looking to ensure that there were adequate levels of maintenance across the country’s rail network. This would not only be done internally by Transnet, Masualle said, but also by the private sector.

Also encompassed in the Demand Plan, the department will look to address the issue of ensuring competitive rail pricing through the establishment of the Transport Economic Regulator.

The regulator, the Deputy Minister explained, would ensure equitable access to the rail network, while simultaneously regulating the pricing of rail services in a way “that will open opportunities for other players in the market to participate”.

Once established, this will open the door for South Africa to have access to additional opportunities within the country, the region and through the confines of the Africa Continental Free Trade Agreement.

Touching on South Africa’s port industry, Masualle noted that the DPE was focusing on ensuring that the ports function much more effectively and at competitive rates.

Over the medium term, significant investments would be made to ensure that the ports increased their speed of return in so far as bringing goods into the country, and allowing South Africa to export goods.

“In short, we are working to ensure these investments will [lead to] additional investments and enable the diversification of participation in these, [while simultaneously inviting] more local businesses to participate.”

Government expected to, in the medium term, spend in excess of R288-billion in the logistics sector, Masualle said.