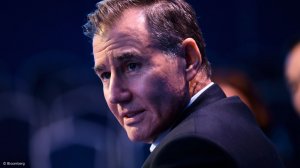 JOHANNESBURG (miningweekly.com) – Diversified miner Glencore’s settlement, this week, of various disputes with entities in the Democratic Republic of Congo (DRC), should allay investor concerns about the risk of a seizure of its DRC assets, says Goldman Sachs.

Glencore, led by CEO Ivan Glasenberg, on Friday announced that it had reached a settlement to pay relevant royalties to Ventora Development and Africa Horizons Investments Limited (AHIL) – two entities affiliated with Israeli-born Dan Gertler, who is facing sanctions in the US – when they become due, in non-US dollars.

Ventora in April served freezing orders in the DRC against Glencore’s Mutanda Mining and Kamoto Copper Company (KCC) for $695-million and $2.28-billion respectively, which Ventora said was the value of future royalties due to it under agreements with Mutanda and KCC.

Glencore and its Katanga Mining subsidiary, which owns Mutanda and KCC, have now determined that the only way to avoid the risk of seizure of its assets in the DRC is for Mutanda and KCC to pay the relevant royalties to Ventora.

Mutanda, KCC, Ventora and AHIL have, therefore, agreed to withdraw all pending and threatened litigation.

Glencore stated that the payment of the royalties in non-US dollars to Ventora without the involvement of US persons would appropriately address all applicable sanction obligations.

On Wednesday, Glencore also announced that Katanga had settled its legal dispute with DRC State-owned company La Générale des Carrières et des Mines (Gécamines) after Glencore agreed to write off $5.6-billion of debt and convert it into new KCC equity. The debt-for-equity swap is expected to help KCC pay dividends and brings to an end legal action initiated by Gécamines.

Analysts at HSBC welcomed Glencore’s latest settlement, stating that two of the three issues facing Glencore in the DRC have now been resolved, with the only outstanding matter being a dispute between Glencore and fellow mining companies and the DRC government regarding a new mining code.

Goldman Sachs noted that the royalties due to Ventora will amount to about $130-million a year, which is not material from Glencore’s perspective.

Analysts at AB Bernstein, meanwhile, said this latest settlement was more evidence that recent events in the DRC should not be seen as part of a “grand asset expropriation plan”.

“First, we had CITIC's investment in Ivanhoe, then we had the resolution of the Kamoto capitalisation dispute with Gecamines, and now we have resolved this royalties issue too. As such, we believe that the events of this week should lead to a significant de-risking of the Congo in investors' minds.”