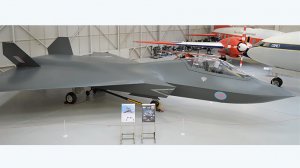 UK-based global major aerospace and defence group BAE Systems (BAES) has reported strong full-year results for 2020. The group is active in the aerospace, maritime (including shipbuilding), armoured vehicle, cyber and intelligence, and electronic systems domains of defence. Only a very small part of the group’s business is concerned with commercial aviation.

“Thanks to the outstanding efforts of our employees and close cooperation with our customers, suppliers and trades unions, we have delivered a strong set of results against a challenging backdrop of the global pandemic,” affirmed BAES CEO Charles Woodburn. “Throughout 2020, we focused on keeping our people safe and supporting our communities, whilst continuing to deliver for our customers. In 2021, we will continue to drive operational performance, progress our sustainability agenda and invest in high-end discriminating technologies to meet our customers’ priorities, which will ensure we are well positioned to grow the business and contribute to the economic prosperity of the countries in which we operate.”

Highlights for the year on the aviation side included Germany’s order for 38 Eurofighter Typhoon fighters for its air force. BAES holds 33% of Eurofighter (with 46% belonging to Airbus and 21% to Italy’s Leonardo group). The Typhoon fighter and BAES Hawk lead-in fighter-trainer programme for Qatar achieved its contractual milestones during the year. Six Hawk aircraft assembled in Saudi Arabia were accepted and entered into service with the Royal Saudi Air Force. And Italy and Sweden committed to working with Britain on the development of the next-generation combat air capability programme, known as Tempest.

On the maritime side, last year saw BAES hand over the last two River-class batch 2 offshore patrol vessels to the UK Royal Navy (RN). The fourth Astute-class nuclear-powered attack submarine, HMS Audacious, began sea trials with the RN. Progress continued to be made in the construction of the RN’s first two City-class (Type 26) frigates and first two Dreadnought-class nuclear-powered ballistic missiles submarines. Further, “good progress” had been made in the initial phases of the Royal Australian Navy’s Hunter-class frigate programme (derived from the RN’s Type 26 design).