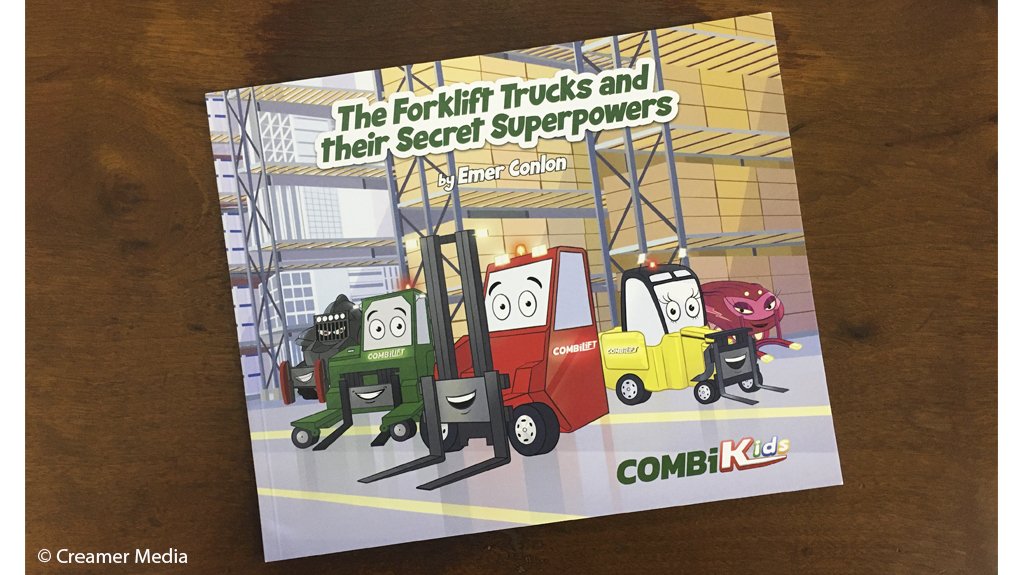 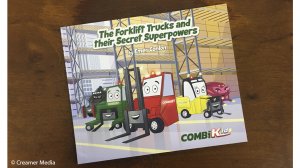 Photo by Creamer Media
Forklift trucks and their Secret Superpowers

The CombiKids book highlights overcoming difficulties, the importance of friendship and that bullying is unacceptable, with the hero of the story always being a Combilift truck who “saves the day”.

In addition, the book reinforces, with the forklift trucks being all different shapes and sizes, that no matter what someone looks like or what shape or size they are, it is important to be accepting of others and of differences.

At first glance, the pairing of a children’s book and one of the largest indigenous companies in Ireland, may not seem like a likely fit. However, when asked about this, Conlon explains that he approached Combilift just over a year ago, with a view to proposing a novel, unique way to communicate with existing and potential customers, as well as being involved in the education of the next generation.

“The idea was to write a children’s book which [puts in cartoon fashion] the main Combilift products and transforms them into characters that children will love,” he says.

Conlon wanted to also use it as a marketing tool for adults and so used the unique selling propositions of the actual forklifts and turned them into the superpowers of the characters. “That way both adults and children would get something from the book.”

Combilift CEO and co-founder Martin McVicar liked the idea, especially the educational aspect for children and as a result of his astuteness, Combilift proceeded to support the book, resulting in the creation of CombiKids.

With Combilift’s unique portfolio of forklifts, the company is changing the way businesses handle and store materials, especially long and awkward loads, or when space is limited.

Employing more than 600 people at its headquarters in Monaghan, Ireland, and with customers in more than 85 countries, Combilift is entrenched in the materials handling industry.

According to Conlon, when writing the book it was important to achieve a balance between Combilift branding and creating a story featuring endearing characters that children would fall in love with.

“The Combilift adventure is a real page-turner, filled with drama and excitement.”

He reveals that the book also has a couple of “baddies” that are not Combilift trucks. “It is a wonderfully appealing story for children.”

For further enjoyment, there is a three-page activity section at the back of the book which includes something for all age groups. There is a mix of one-off activities, such as join-the-dots and a word search puzzle.

It also includes activities that can be completed numerous times, such as a maze, spot-the-difference and a map of the world. “These will add to the engagement and interaction that children will get from the book,” says Conlon.

McVicar explains that, for Combilift, it was important to be involved with the education of the next generation and, to that end, the company already has a number of programmes including apprenticeships and tours.

However, he says the company’s CombiKids initiative will involve even younger children.

“The idea is that little ones would ‘buy into’ the Combilift brand when they are young by creating an association with it, thus encouraging future engineers and lots of other budding talent, as well as motivating children to read.”