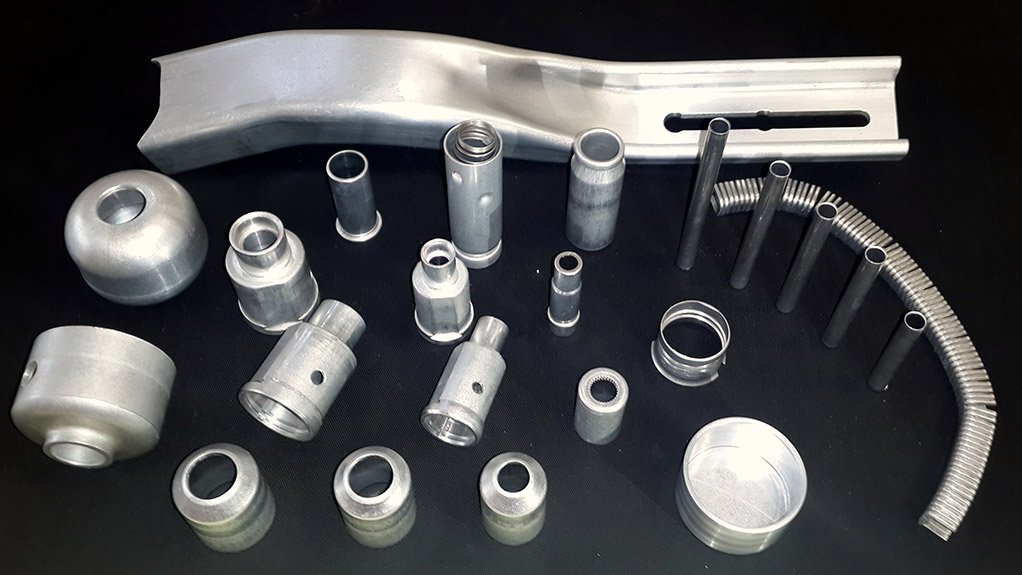 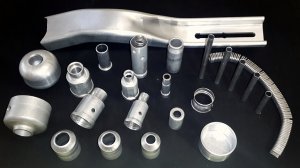 FULL OFFERING AC Exports' product range, including a spool of U-clips on the far righ

The arrival of the custom-made machine from a European specialist machinery manufacturer will create new business for AC Exports, as it will be the first time the Spooled U-clips, which are typically used for packaging sausages and polony, are manufactured locally, he adds.

“We designed the process and are developing it in conjunction with the European manufacturer,” adds Reuning.

The machine has a capacity of 12-million aluminium clips a month, which will be used to fasten the ends of packaging.

Reuning notes that the main reason for the clips being made out of aluminium is that they are corrosion-resistant. Aluminium can be shaped into form easily and retains its shape once it has been clipped.

Reuning states that AC Exports has secured a client to buy the clips when production starts in January 2016.

The clips are manufactured on a spool and have to be precisely manufactured with rounded and waxed ends so that they can be individually separated and do not cut the sausage casing when they are fastened. Their dimensions must also be consistently precise because they are fitted by an automatic machine, notes Reuning.

He expects that this new venture will be a significant learning curve for the company’s workers, but he maintains that the business is experienced in terms of the stringent process controls and attention to detail that work like this demands.

AC Exports’ expansion into manufacturing clips will increase the company’s aluminium demand by about 4 t/m.

The company is also receiving a new transfer press, which will increase its capacity by about 20%. Current aluminium consumption is around 18 t/m.

Transfer presses are used for deep drawing – AC Exports’ most extensively used production method. The company has five transfer presses that they use to create between four-million and six-million deep-drawn components a month.

Deep drawing entails a strip of flat sheet being sequentially blanked, cupped, drawn and redrawn into various sizes and shapes. The presses have 12 stations, allowing tubes with higher length-to-diameter ratios, and parts with tighter tolerances and more complex geometries, to be formed than would be possible on normal metal presses.

Products produced on these presses include detonator shells for the mining industry.

In addition, AC Exports owns a mechanical-impact extrusion press that manufactures crimp sockets and couplings as air-conditioning components for the automotive industry. The machine can manufacture 150 parts a minute.

Impact extrusion is a process where a solid aluminium slug is placed in a cup-shaped die and a punch hits the slug with such force that the aluminium slug is hollowed out into a cup shape, with the material that was in the centre of the slug now forming part of the sides.

AC Exports’ punch hits the aluminium slug with a 140 t impact and the impact extrusion machine is typically applied to soft metals such as aluminium, zinc and copper. The transfer presses can be tooled up to process most metals; however, the company currently focuses on aluminium.

Reuning, a mechanical engineer who started the company in 2000, explains that AC Exports is a niche contract manufacturer that originally manufactured and exported automotive components.

He noticed that certain tube-form components were being imported by the local automotive industry, after which AC Exports began manufacturing heat shields for the local industry.

Other tube-formed components for the automotive industry followed, including mufflers and tunnel strut components. These were manufactured using multistage tooling on AC Exports’ hydraulic and eccentric presses.

In addition to manufacturing impact extrusion products, such as crimp shells and couplings for the automotive air-conditioning industry, AC Exports branched out into deep drawing.

Reuning states that the company aims to expand in terms of its product range and that it is geared towards mass production. New products which are suitable for AC Exports to include in its manu- facturing roster include electrical and electronic components of copper and brass, as well as aerosol cans.