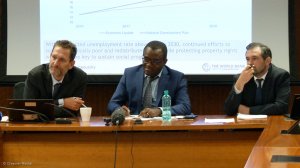 New analysis by the World Bank has confirmed that South Africa is not only the world’s most unequal country, but that extreme inequality has become a major constraint to higher levels of economic growth, because it is undermining policy certainty and depressing investment.

The bank’s latest South Africa Economic Update, which focuses on the theme of jobs and inequality, notes that, at 0.63, South Africa’s 2015 Gini coefficient was the highest internationally and that inequality had worsened since 1994, despite a decline in poverty. The Gini coefficient is the measure of income inequality, ranging from 0 to 1, with 0 representing a perfectly equal society and 1 representing a perfectly unequal society.

Releasing the report in Johannesburg, country director Paul Noumba Um stressed that inequality would have been even worse had it not been for government interventions, since 1994, to increase the social wage through investments in education, health, transport and housing, as well as by providing social grants to 17-million South Africans.

Nevertheless, fundamental policy action was required to tackle inequality, as well as to stimulate more inclusive growth. Um expressed optimism that the jobs and investment summits proposed by President Cyril Ramaphosa might provide platforms for a national conversation on policies that could help address the country’s chronic poverty, unemployment and inequality problems.

In the absence of any intervention, however, the World Bank expects South Africa to continue on its low-growth path. The economy would also continue to diverge from the growth outlooks in other emerging markets and developing countries, where expansion of 4.5% and 4.7% is forecast for 2018 and 2019.

The forecast is “bearish” when compared with recent revisions made by the National Treasury, as well as some private economists. The National Treasury expects the South Africa economy to grow by 1.5% this year, 1.8% in 2019 and 2.1% in 2020. S&P Global Ratings has revised its growth forecast for South Africa to 2% for 2018, from 1% previously, and expects the economy to expand by 2.1% in 2019.

However, World Bank program leader Sebastien Dessus and senior economist Marek Hanusch argued that, while there had indeed been a recovery in confidence following the “smooth political transition” from President Jacob Zuma to Ramaphosa, the rise was yet to translate to an acceleration in investment.

Dessus added that South Africa risked missing out on new global economic opportunities with its growth potential not only remaining low, but close to “nil in per capita terms”, given the country’s population growth of 1.1%.

It was also highly unlikely, given current constraints to growth, that South Africa would expand in line with the 5.4% a year rate outlined in the National Development Plan for eliminating absolute poverty and reducing inequality by 2030.

The bank found that slow growth and high inequality reinforce each other, with inequality fuelling a contestation for resources, which, in turn, increased policy uncertainty and discouraged investment.

“Growing investor uncertainty in the face of strong political demands for redistribution of wealth has contributed to a private investment slowdown in South Africa,” the report highlighted.

In addition, high levels of inequality combined with high levels of political rights, as is the case in South Africa, would result in a high demand for fiscal redistribution and larger government expenditure.

However, there was fresh potential to stimulate growth and reduce inequality in light of the fact that labour status had become the most important factor driving income inequality in South Africa.

“This is good news, because it’s actionable, as opposed to race, or location of origin,” Dessus explained. “Inequality is still very high, but it can be influenced more than in the past, because it is increasingly being determined by labour market developments.”

In other words, inequality could be reduced by accelerating the supply of skilled labour in an economy that had become increasingly capital and skills intensive. While there was little demand for unskilled labour the demand for skilled labour was driving wage inequality. “Education is now the biggest factor of inequality, surpassing race,”  Dessus stressed.

South Africa’s ongoing investment in education would pay off, with the bank projecting that, even without major reform, income inequality should be lower in 2030 than in 1996, owing to the improvement in education levels among the poor.

“Even in our business-as-usual scenario, the poor will receive an increasing share of skilled labour income,” Dessus explained. The change, though, would be slow and inequality levels would only recover to 1994 levels by 2030.

However, inequality could be reduced further by accelerating labour-supply interventions, including the offer of financial support to poor tertiary students to raise the number of poor students earning a degree to 4.6% in 2030, from 2.2% in the bank’s business-as-usual scenario.

However, the effectiveness of labour-supply interventions alone would be limited unless accompanied by growth programmes that stimulated both labour demand and provided the financing required for the supply-side programmes.

The growth-supportive reforms envisaged included an increase in product-market competition, a reduction in policy uncertainty and a relaxation of migration rules to help fill the gap between the current demand for skilled labour and supply.

For every two skilled migrants allowed to enter South Africa, the bank estimated one semi-skilled or unskilled job would be created. Reducing policy uncertainty in the mining sector, meanwhile, could increase investment in the industry by 25%.

“Growth interventions alone do not reduce inequality by much. However, combining labour supply and demand interventions would almost eradicate extreme poverty by 2030,” Dessus added.

Bank simulations show that such policy reforms could reduce the number of poor people in South Africa to 4.1-million in 2030, compared with 10.5-million in 2017, while the country’s Gini coefficient would improve to 0.56.

“The message here is really about the quality of growth. To be faster, growth needs to be far more inclusive,” Dessus concluded.