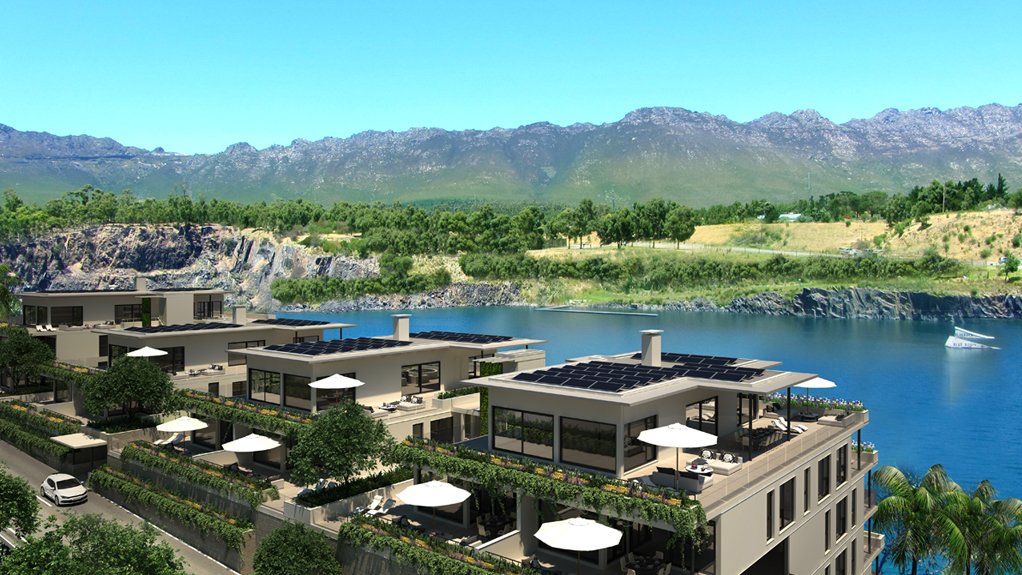 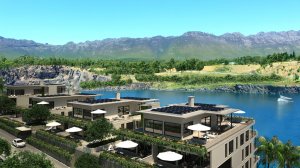 The development is a ten-year project, with the first phase of 32 apartments – known as Giovanni’s House – already up for sale, with construction set to start in August. Phase 2 will follow thereafter, also with 32 apartments. Units for both phases are priced from R3.4-million.

“There is no question that green buildings represent one of the genuine success stories of green business,” says Swisatec director Lukas Reichmuth.

Blue Rock Village is being developed according to the Leadership in Energy and Environmental Design (LEED) green building standard, which established a solid set of benchmarks.

Swisatec is using solar photovoltaic energy to meet the bulk of its energy demand. It is also developing public transport facilities as part of its car-free living concept. It is based on the natural surroundings in the area, thereby enabling residents to “truly experience the great outdoors”, says Reichmuth. Therefore, all parking facilities are situated underground to “maximise the green living”.

Water recycling initiatives, such as Blue Rock Village’s shower- to-sprinkler concept serve to recycle water, and insulation technologies are used in each apartment to ensure moderate temperatures in winter and summer, as well as a degree of noise attenuation and dust control.

Further, an internalised recycling management system will use village services, which go from residence to residence to remove refuse and separate at source any recyclables.

Each apartment is fitted with A++-rated energy efficient appliances and light-emitting diode lights.

The lake has a depth of up to 60 m, which used to be a quarry site, in which skiing and scuba- diving are frequently facilitated.

The apartments have spacious ceiling heights up to 2.8 m, with large double-glazed windows of up to 2.4 m. These features, says Reichmuth, creates a feeling of wellbeing and also enables the residents to have unrestricted access to the surroundings and views from their homes.

“The property is strategically located, in close proximity to Gordon’s Bay, the Strand, Somerset West and Grabouw, as well the N2,” says Reichmuth, adding that this provides for an aesthetically pleasing development that will bring the necessary economic stimulation to the area.

The required upgrades, as proposed in the Traffic Impact Assessment, will also serve to provide improved access to the surrounding neighbourhoods. “This makes the development highly accessible for vehicular traffic on the N2,” he notes.

The lifestyle centre is the “heart of the village”, Reichmuth states, adding that it will be able to facilitate live music concerts, markets and operas. Linked to the centre is a hotel and conference centre, as well as a spa, which includes various therapeutic facilities, and an indoor and outdoor swimming pool.

Apartment Options Apartments are available in four layout types: studio, one-, two- and three-bedroom formats ranging in floor space from 75 m2 to 180 m2.

“All apartments are meticulously designed using quality detail throughout,” says Reichmuth, adding that the materials used for the buildings are environment friendly and guaranteed for ten years.

The nearby Helderberg area has three disadvantaged communities including Lwandle, Sir Lowry’s Pass and Nomzamo, which stand to economically benefit as a result of the development, he concludes.